Defend Crash Site is the fourth mission in the GDI campaign of Tiberian Sun. 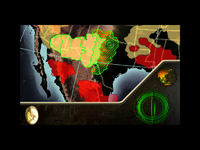 Whatever is contained in this craft, it is apparent that Nod doesn't want GDI to have it. Protect the crashed UFO until GDI reinforcements can arrive to fortify the area.

The GDI had managed the secure the crashed alien ship and had recovered the artifacts that Nod had retrieved from the site from the nearby Nod tech center inside the base.  The GDI had then constructed a small base in the vicinity of the crash site and had installed Vulcan Cannon Upgrades to cover both access points to the site.

General Solomon had guessed that Kane would order the ship's destruction rather than let its alien technology and knowledge fall into the hands of the GDI. McNeil, already stationed there; was quickly ordered to take command of the base and defend the crash site at all costs until GDI reinforcements could arrive.

It so happened that General Solomon's suspicions were correct. General Vega acting with or without instructions from Kane was determined that the alien warship should be obliterated before the GDI could complete their investigations into it's inner workings and the forces of the Nod military zone in Texas had been ordered to launch an assault on the site with all their available forces.

Michael McNeil was given 5000 tiberium credits; with which to finance the recruitment of additional forces using the crash site base's barracks and to repair damage to buildings and the alien warship itself.  Reinforcements were also enroute, but as the GDI dropships arrived to reinforce Michael McNeil; a sudden ion storm erupted and lightning blew them out of the sky.

Michael McNeil would have to defend the site with only the soldiers he had already and those he could train within the base's barracks using his limited resources. Nod forces soon began to arrive in a number of waves.  Their attacks were desperate, hasty and uncoordinated and consequently Michael McNeil was able to defend the base against them despite the loss of the reinforcements.

At one point however a Subterranean APC filled with Rocket infantry emerged from the earth next to the crash site and began to attack the alien warship directly.  But despite this Michael McNeil was still able to defeat the infantry and protect the ship.

With the help of these Titans, Michael McNeil was able to utterly eradicate Nod's final assault. Not a single Nod soldier or vehicle from any of the assaults managed to flee, nor did any attempt to do so; they were all wiped out to a man.  At this point it became clear to the Texas Nod command and General Vega that now they were being reinforced; the GDI forces defending the crash site would soon be too powerful for them to possibly defeat with their now diminished forces.

Thus the battle came to an end and the GDI were victorious. 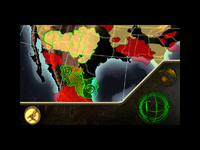 GDI forces advance into Mexico in a bid to reach Tratos.

As soon they were secure in their control of the crash site, Michael McNeil and a small team explored the inside of the alien ship but was then ambushed by a female mutant named Umagon and captured.

Despite this initial hostility between McNeil and Umagon, they struck a deal - Umagon would give information to where General Vega's main base was located as long as McNeil helped the Forgotten to rescue Tratos from the Nod-controlled hospital in which he was imprisoned.

Meanwhile the failed offensive to regain control of the crashsite had drained the Nod military zone in Texas of it's best men and equipment. Consequently Texas fell swiftly into GDI hands and it now seemed that the GDI's grip on the south-western USA was uncontested.

Additionally GDI forces were now ideally positioned for an assault on Nod Mexico, which was where Tratos was being held.