Destroy The SAM Sites is the third mission in the GDI campaign of Tiberian Dawn.

The fall of Estonia gave GDI some airfields in which to place some of their A-10 Warthogs. These planes rained their firebombs down on the Nod forces in Latvia and GDI forces swiftly overran much of the country including Riga, Latvia's capital. The surviving Nod forces fell back to their fortifications in the nearby town of Jelgava. The GDI air force found itself taking heavy casualties from Nod SAM sites as they attempted to bomb the fortified town. 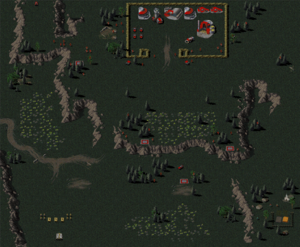 Rather than launching a direct assault on Jelgava, GDI forces instead opted to outmanoeuvre Nod and launched an attack from the south where the fortifications were weakest. James Solomon commanded the assault; the objective of which was to eliminate a Tiberium mining base south of the town and also to eliminate all the nearby SAM sites, allowing the GDI planes to bomb Jelgava. If James Solomon achieved the second objective he was informed, he would receive a limited amount of air support to achieve the first objective.

At this point the GDI had begun to field a new version of the old Soviet Grenadier. With the help of these James Solomon managed to destroy all the SAM sites and also the base though whether he actually made use of GDI air power to achieve the base is unknown.

The elimination of the SAM sites created a breach in the wall of SAM sites surrounding Jelgava. The GDI air force launched a massive assault, immolating the Nod forces in Jelgava. Having breached the town's fortifications to the south GDI forces would then pour into the town eliminating whatever was left of the Nod forces and seizing whatever was left of the town itself.

With the fall of Jelgava, the government of Nod Lithuania fearing the power of the GDI air force promptly surrendered. As GDI forces occupied Lithuania however Nod had already launched a massive offensive against neutral Ukraine, Romania and Bulgaria in a bid to increase their strategic depth against the GDI offensive. 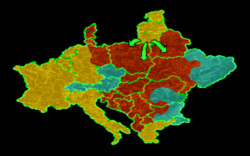 At the same time the supposadly neutral government of Denmark had just declared in favour of Nod concurrently with Nod's Polish forces launching their assault on Germany. Launching an offensive from Denmark and Poland simultaneously Nod would overrun GDI forces and conquer swiftly eastern Germany.

With the Nod flag flying over Berlin and the Ukrainian army fighting a desperate losing battle against invading Nod forces, there was a key decision to make as to whether to primarily invade Belarus and help Ukraine or to invade Poland and help Germany.  Mark Jamison Sheppard however had departed for the UN and temporarily left command over his forces to James Solomon, meaning the that decision was now his.  Although the decision James Solomon actually made is not actually known its strategic implications must have been great.