Destroy Vega's Base is the fifth GDI mission of Tiberian Sun. It involved capturing General Vega, commander of Nod forces in the Americas.[1] 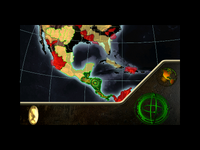 Vega's base of operations is in the area. It is heavily guarded by SAM sites, and a secondary outpost provides reinforcements. Destroy all Nod forces in the area, but capture Vega's Pyramid intact - there is information there that we can use. You will have only limited troops until the SAM sites are neutralized one way or another.

With no intel on Nod General Vega's whereabouts, GDI had been at a loss to track him down. However the Forgotten woman Umagon made a deal with GDI commander Michael McNeil to tell GDI where Vega's main base was in exchange for rescuing her leader Tratos. When McNeil's forces successfully rescued Tratos from the Nod hospital research facility where he was imprisoned, Umagon had finally revealed General Vega's location.

GDI located Vega's base on an island in the Caribbean off the coast of Honduras. A GDI strike team may or may not have already destroyed the hydroelectric dams and crippled Vega's air defences, but regardless Michael McNeil and General Solomon had decided it was now time to eliminate General Vega and so decapitate the Nod forces operating in the Americas.

General Vega operated from within his own Pyramid Temple, similar to the ones that his late superior General Hassan and now Kane had used but with a more Mesoamerican theme. Michael McNeil was ordered to avoid destroying this temple, the information it contained was most valuable and the GDI would also have preferred to capture General Vega alive in order to interrogate him.

Vega's 'island' was actually three islands connected by bridges. There was the larger central island on which the GDI landed their forces, the smaller island to the north-west where Vega's main base and temple were actually located and the smallest island to the south which may have contained the main port on the island and a small Nod base providing reinforcements and supplies to the main Nod base.

The GDI forces used the element of surprise to land a small force of infantry on the central island were making their way to some fields of blue Tiberium to the south where they clashed with Nod patrols. Had the operation to destroy Vega's dam already met with success, they would then have been joined by reinforcements including a MCV allowing them to construct a base and mine this valuable Tiberium resource.  Otherwise this initial force would have had to destroy the SAM Missile sites on the island first.

Michael McNeil was advised to make use of the GDI's Amphibious APCs to cross the water and launch an amphibious assault, thus avoiding the base's ground defenses. With the help of these amphibious carriers, the GDI were able to storm the main Nod base on the island and successfully capture Vega's Pyramid Temple. They then secured their success by eliminating or capturing all remaining Nod facilities on the island and the secondary base, until the island was completely under GDI control.

﻿With Vega's forces destroyed and Vega trapped in his command centre within the now GDI controlled Pyramid Temple, McNeil and his lieutenant Chandra infiltrated Vega's command centre, quickly taking out his 2 remaining bodyguards as they edged closer to Vega.

Meanwhile the defeated Nod general made a desperate plea to Kane on the screen for reinforcements﻿. But Kane responded that he did not *have* to send reinforcements as Vega had implied and told Vega that when McNeil arrived to kill him he would be able to teach him a few lessons that Vega would carry for the rest of his life, "which is about seven minutes". The importance of the information contained within the temple was of such importance that it could simply not be allowed to remain in GDI hands. His conventional forces having failed him, Kane had in his view no choice but to order a nuclear strike on the temple.

But as McNeil arrived, Vega committed suicide by overdosing on the drug Eye Candy. McNeil and Chandra thus arrived too late to successfully question him on the whereabouts of the Tacitus (all they got was semi-coherant gibberish) and Chandra alerted McNeil to the countdown timer to the nuclear strike displayed on the screen. As a result McNeil and Chandra managed to make it back onto the Kodiak and escape before the island was obliterated.

But though McNeil and his command team were able to escape aboard their Kodiak, the nuclear blast obliterated the Temple and anyone else on the island, the victorious GDI forces save perhaps those who could be evacuated on time by air were vaporized along with any prisoners they had taken and whatever civilian population the island may have had. This was the only known use of nuclear weaponry in the Second Tiberium War by either side.

GDI had now lost their only lead to the whereabouts of the Tacitus along with General Vega's death and had failed to secure the Pyramid Temple and extract it's information. Nod forces in the Americas were regrouping, Michael McNeil in his rapid advance across the Americas had left many pockets of Nod resistance behind him and as a result when McNeil led his army into nuclear annihilation on an island off Honduras, those pockets had swiftly regrouped and ate away at his earlier gains in the Americas.

Worse, as Michael McNeil was leading his forces into nuclear oblivion, Anton Slavik had reemerged in North America and raided the Alien warship that earlier McNeil had captured for the GDI, seeking to retrieve Tacitus for Kane. In the Americas Nod may have lost their General Vega but he had now been replaced by the legendary Anton Slavik.

Michael McNeil was now tasked with securing his earlier gains against the Nod resurgence in the Americas and with putting an end to Anton Slavik's designs. There was still a long fight ahead of him.