Destroy the Mammoth Tank Facility is the thirteenth Nod mission during the First Tiberium War from 1999 to 2002 against the Global Defense Initiative.

The GDI had not only been working on their new ion cannon, they had also been working on more terrestrial weapons. Within a Weapons Factory near Mzuzu in Tanzania, GDI engineers and scientists were working upon a modernised version of the old Soviet Mammoth Tank. With the help of these weapons they hoped to be able to push back Nod forces and halt their southwards offensive in Africa. However with only a single production facility and a few working prototypes the rapid Nod advance in Africa suddenly rendered their Mammoth tank rather vulnerable just as it approached completion.

Kane knowing the power that the old Soviet Mammoth Tank had did not wish Nod forces to face these new weapons. He carefully assembled a small elite team of soldiers including a Commando and placed it under the command of one of his most talented commanders, perhaps even the hero of Egypt himself.

Using stealth and surprise they managed to sneak there way into the facility and finding the location of the Mammoth tank factory they totally obliterated it. They also at the same time destroyed all the working prototypes of the weapon that they could find within the area. Having done so the surviving soldiers immediately fled, whether successfully or otherwise and left more convential forces to conquer Tanzania. 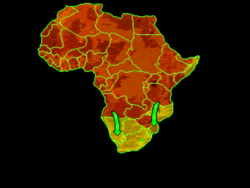 The tanks and the factory were destroyed, dealing a major blow to GDI's military power in Africa. Without being obstructed by Mammoth tanks, the Nod advance into Tanzania and Angola continued unchecked into Namibia and Mozambique.

However things were not as bad for the GDI as they first appeared. The GDI had not been so foolish as not to have a completed copy of the Mammoth tank plans kept somewhere else. As a result it did not take them long to build new factories elsewhere in Africa and beyond, and they began to deploy them in Africa around the time that Nod forces reached Namibia and Mozambique.