Despite the success of the previous mission, the Scrin still managed to push their way to Sydney and established a footing at the harbour foreshore. Seeing that victory is very slim, GDI decided to evacuate the city of its civilians. Nod was tasked to assist in the evacuations and prevent GDI from falling prematurely.

The Nod forces had already established a sizable base (including a Temple of Nod) at the soccer fields and were preparing their defenses against the oncoming alien attacks. The Nod commander was tasked to evacuate the civilians and hold out for ten minutes. While GDI was bearing the brunt of the alien assault, Nod established a refinery and began to pile up a war chest of 25,000 credits. A Saboteur also captured the city's Tiberium Spike, but was unable to capture the city's harbour defenses due to a large alien presence there.

With no ion cannon access, the battle between the Scrin and GDI was locked into attrition with the aliens gradually pushing GDI back to their base. Nod attempted to escort the V-35 Ox transports and help GDI but the heavy Scrin presence forced Nod to firmly defend themselves. Nod could only stage hit-and-run attacks at this point.

After ten minutes of holding out Kane revealed himself to be very much alive, much to the shock and joy of his Nod followers. Kane furiously ordered the Nod commander to obliterate GDI, and also permitted him to use the nuclear missiles. Kane's return saw the end of the alliance between Nod and GDI, and the commander saw fit to terminate it by wiping out GDI in a nuclear bath. A nuclear missile was thus launched from the Temple of Nod but instead of striking the Scrin, the missile struck the GDI base, followed by Nod forces striking from the lightly guarded rear.

GDI soldiers were shocked by this turn of events and immediately resumed war against Nod. But GDI was fighting on two fronts, and the Nod forces destroyed the base while the bulk of GDI armor was combating the Scrin. The base was soon destroyed and the remaining GDI forces became caught in the crossfire.

In an undisclosed location Kane expressed his anger and frustration that no one understood that the events had unfolded exactly as he planned. Convinced that Kilian was behind the renegade attack at Temple Prime, Kane ordered the Legendary Insurgent to storm her command center at Ayer's Rock and arrest her. 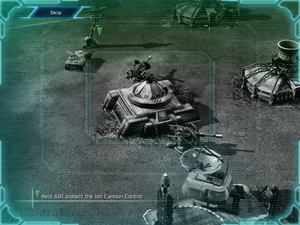 If the ion cannon control center was not destroyed by the player in the previous mission, GDI would have access to the superweapon in this mission. Therefore the tide of the battle could turn to GDI's favour. Also attacking the control center or any other GDI unit/structure before Kane's return would immediately convince GDI to resume war against Nod.

Two saboteur can be-cunningly- placed near GDI MCV, staying idle until the time is right. Depend on the timing by the time of Kane's appearance those saboteur can be ordered immediately to snatch GDI's conyard. A reinforcement and support parties must be available nearby (stealthed is preferred). GDI will be weaked after this but Nod will be required to reinforce neutral building as Scrin's air campaign began to unfold.