Surveillance footage of the Dreadnought's primary and secondary functions

When the first Molot V4 rocket screamed across the gray Siberian sky and obliterated its target--a crude plywood mock-up of a medium-size patrol boat incongruously assembled hundreds of miles from the nearest ocean--the military leaders in attendance viewed the burning splinters with the pride of a parent watching a beloved child win a chess championship. Amongst the circle of beaming faces, however, one steadily grew dour as additional test runs were carried out. For Master Shipwright Sergei Kondakov, the unbridled success of the V4 meant that top military leadership would soon be knocking on his door, requesting the next evolution of the weapon, and he already know what they would be asking for. Firing these behemoths from solid rock at a stationary target was one thing. Compensating for their thrust on an unstable platform at the mercy of the roiling ocean would, he knew at that moment, would be the greatest technical challenge of his career. This was the moment in which the modern Dreadnought was conceived. 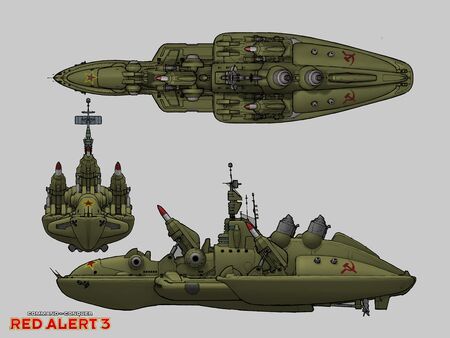 The Soviet Union's Ministry of War would wishes for all the world to join in celebration of the Dreadnought, undeniably one of the mightiest vessels ever to sail the seas.

An imposing sea-hulk by every means, the Dreadnought had already made a name for herself in various engagements by proving virtually unsinkable when matched against other warships. Teaming up with the deadly Soviet Akula-class submarines provided protection from flanking attacks, ensuring the Dreadnought's reputation as one of the most formidable forces on the water. While she was devastating in sea-to-sea combat, however, one can still think back to a time when she lacked the capability to strike inland targets. However, the days of Dreadnoughts turning broadsides with their cannons are long gone thanks to Kondakov's work.

Selecting the largest standard ship chassis in the Soviet Navy was the easiest decision of the process for Kondakov. No other vessel was capable of handling the mighty bulk of the Molot V4, much less scores of them. Even so, fitting the launch mechanism onto the ship was a herculean task. Taking into account the supply line of rockets stored below the mechanism, Kondakov and his team had to completely reconfigure every deck. In the end they managed to make the impossible a reality. Yet the sacrifices they made, such as reducing the crew's living quarters and eliminating an auxiliary latrine, earned the Dreadnought a few unfortunate nicknames among enlisted men. Nevertheless, Dreadnought officers are noted for being extremely proud of their service to the Union. 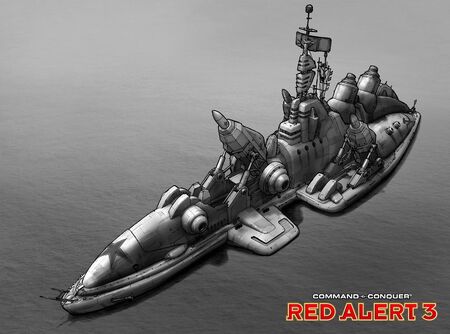 Time and again, the Soviets have proven that nothing can withstand direct assault from the Dreadnought's ballistic rocket launchers.

Despite the triumphs achieved by the Soviet engineering team, Kondakov considered the Dreadnought only a partial victory. The mighty recoil of the fearsome Molot V4s made any degree of accuracy at even modest speeds unattainable. Thus, the Dreadnaught was forced to come to a full stop before launching a volley, a maneuver that could put both the ship and crew at significant risk during a combat situation. The potential loss of such a high-expense siege platform and, to a lesser extent, the men on board, would drive Kondakov to push the limits of Soviet innovation even further. By incorporating the jet propulsion mechanics of the Soviet MiG fighter, redesigned to use a steam-based thrust mechanism, Kondakov's team developed a system of precisely-defined shock absorption that would counteract the kickback of the Molot V4.

With rapidly-increasing budget concerns and military leaders breathing down his neck, Kondakov unveiled the Dreadnaught to the world in a spectacular display of wanton destruction. Before the charred remains of a mock coastal outpost could even wash ashore, the Dreadnaught had become a thing of legend. All of a sudden this new model of Dreadnought could quite literally swim circles around coastal defenses while pounding them with ballistic rockets.

The legend would only grow with the Molot V4-equipped Dreadnought's performance in battle. The captains of such vessels quickly gained a reputation for patriotism and courage, as the Dreadnaught's rain of fire crushed Soviet opposition across the globe. The ship's imposing bulk could hardly be missed when cresting an oceanic horizon, quickly adding yet another weapon to the already-impressive arsenal: fear. In the years to come, watching an entire fleet flee from the shadow of an oncoming Dreadnaught would become a commonplace occurrence. The powerful Molot V4, however, ensured that some targets would never have a chance to escape. Barracks, power plants, refineries, fortress walls--anything that cannot pick up and move is subject to the Dreadnought captain's mercy.

Battlefield reconnaissance has revealed at least these facts about the Dreadnought: