EVA units are responsible for supplying field commanders with vital intelligence, as well as organizing all communications and briefings.[2] They are able to communicate with their users using voice synthesizers, and can accept voice commands.

During battles, EVA units serve as the link between commanders and forces in the field. They act as the command interface for troops and bases, provide radar information, update the commander with mission objectives, and warn the commander when they are under attack, among other functions.

Individual EVA units are usually located in bases, outposts, and mobile command centers; these units are directly connected to major command centers, such as the GDSS Philadelphia and Southern Cross. A portable, wrist-mounted version of EVA was used by members of the GDI special forces. In addition to receiving mission objectives, this model also has a radar and map function.[3]

During the First Tiberium War, EVA battle interface was used by both GDI and Nod, though it was unclear which side had invented it first. 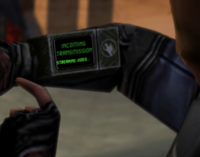 After the Białystok scandal, the United Nations cut funding to GDI. As a result, the security access of GDI's EVA units was revoked, disconnecting them from GDI command and forcing them to engage tactical isolation procedures. In this state, they continued to update GDI commanders with what little intelligence can be gained from public news programs and facilitated communications with regional GDI forces.

During this time, Kane somehow hacked the EVA of Commander James Solomon and taunted him, revealing that the scandal was the result of his media manipulation.

Eventually, UN funding was restored, and so was the EVA units' connection to GDI Command.

During the war, GDI commandos, such as Nick "Havoc" Parker, were equipped with wrist-mounted EVA units. These units had a radar function, a bio monitor that provided readouts on the user’s health, a weapon status display, and a targeting system. Similar to the version used by commanders, they were able to receive mission objectives in real time. They also had a data links function, which kept track of various information such as persons of interest and weapons profiles.

By the Second Tiberium War, GDI's artificial intelligence technology had advanced significantly. EVA units were now able to perform complex strategic assessments and combat scenario predictions. EVA units worldwide were now linked to GDI's global command center, the space station Philadelphia.[4] Every major GDI base was equipped with its own EVA unit, which proved to be a security risk when Nod raided a GDI airbase and stole its EVA unit, which was later reprogrammed for their use.[5]

When deploying forces, EVA would begin by analyzing combat zone topography, then compiling wartime conventions, gathering intel on involved factions, creating theories on likely enemy plan with, then performing a secondary check of combat zone before actually deploying forces to combat zone. Last, it would perform a final analysis of outcome.

The Brotherhood, on the other hand, phased out EVA units entirely in favor of a new artificial intelligence named CABAL. Technologically, CABAL was far more advanced than EVA, and even had a personality of its own. However, after Kane's apparent death at the hands of Michael McNeil, CABAL turned on the Brotherhood and threatened to wipe out all of humanity with an army of cyborgs, forcing GDI and Nod to temporarily work together to destroy the rogue AI. After CABAL's betrayal, the Brotherhood used the aforementioned stolen EVA for coordination and communications.

Scrin Foremen were assisted by a type of similar AI. The Alien AI, similar to CABAL, had a will of its own, and was capable of questioning and even outright rejecting order given by its superior in order to protect its Foreman.