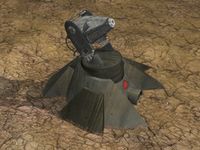 An electromagnetic pulse, or EMP, is a powerful burst of electromagnetic radiation from an explosion or energy field that causes damage to electronic devices via a power surge. As many types of military circuitry are damageable by EMPs, both GDI and Nod have looked to harness EMPs as a way of disrupting enemy technology. Military hardware, though susceptible to disruption, was sufficiently protected to survive an EMP blast, though the units affected would be temporarily immobile. Effected ground vehicles would suffer engine failure and be vulnerable for a period of time. When used on aircraft, this would generally result in it crashing down after experiencing engine failure.

By the time of the Second Tiberium War, GDI and Nod had both managed to harness EMPs, in the form of EMP cannons and their mobile variant.

GDI, in an effort to impede Nod efforts inside Yellow Zones, built EMP control centers in major Yellow Zone cities. Theoretically, a volunteer civilian crew would rush to use the EMPs on advancing Nod forces, but by the time of the Third Tiberium War, EMP centers were largely abandoned because of practically no Nod activity in the preceding years. They could be reactivated though, for if a skilled engineer entered, it remained operational until destroyed or lost due to capture from an opposing side. 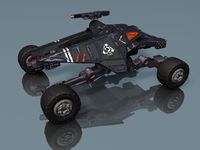 GDI and Nod also researched new EMP technology by the time of the Third Tiberium War. By this time, GDI had hardened much of their equipment against EMP, but new developments in the weapons managed to get around the shielding. GDI's Shockwave artillery was an electromagnetic artillery strike, that, due to special modulation, would cause a localized EMP in the targeted area. GDI Grenadier squads could be upgraded with limited-use EMP grenades, using similar principles to the artillery, with the exception of Steel Talons grenadiers, as their focus was on armor rather than infantry technology. Nod mounted EMP coils as an optional upgrade on raider buggies, and equipped its renovated cyborg legions, the Awakened and Enlightened, with directional EMP cannons. Even the Scrin had a similar technology applied to their Annihilator and Reaper Tripods, who could unleash a wave of disruption at close range.

This technology was used by the Scorpion tank (Tiberian Twilight) during the Fourth Tiberium War. In this case, the Scorpion Tank subdued its targets (small to medium-sized vehicles), used EMP to disable them, and ripped them apart with the miniature Obelisk of Light on its tail.

EMP weapons were generally used to paralyze heavily armoured units or concentrations of armoured units. Massed tanks had the most to fear from mass EMP weapons. Some commanders would spread tanks out over the battlefield so they could not all be shut down at once. However, doing so would mean that fewer tanks could be used at once making them less effective. Larger vehicles such as the Mammoth Mk. II and most epic units warranted EMPs even if alone.

With EMPs becoming popular weapons, efforts have been made to neutralize such weapons. All infantry, except Cyborg units, were immune from the effects of EMP weapons making old fashion infantry raids useful for taking out EMP weapons. Interestingly enough, infantry clad in powered armor (such as Zone Troopers) were immune to EMP attacks so they were suitable counters also. CABAL used EMPs during the Firestorm Crisis, and had managed to successfully shield some important technology from EMP disruption, namely, the Core Defender. The Temple of Nod also came equipped with counter-EMP technology, which could be applied if the Nod base was struck by a pulse. Steel Talons' Titans and Mammoth 27s adaptive armor isolated the vehicles from EMP effects as long as the armor was active(although a group of cloaked Raider buggies can disable them with little warning and difficulty before the adaptive armor can be activated). The Scrin's forcefield generators and attenuated forcefields, as well as the energy fields of the Shielded Harvester, would block an EMP blast, however, doing so would completely deplete the shield.