Electronic Arts Los Angeles (abbreviated as EALA or EA LA) was the group name of multiple studios in a single compound located in Los Angeles, California. At its peak in the late 2000s, at least three known divisions were known to have operated in it: a team that originally started out as DreamWorks Interactive and focused on first-person shooters like the Medal of Honor series; an RTS team, which was assigned to the Command & Conquer series between 2003 and 2010, as well as The Lord of the Rings: The Battle for Middle-earth series; and a casual game team. EA Los Angeles was split to two separate studios (Danger Close and Victory Games) in 2010, despite being in the same building.

Today, the only successor of EA Los Angeles is DICE Los Angeles, which is essentially a renamed Danger Close.

The release of Medal of Honor: Frontline in 29 May 2002 was the first to be published under the studio's new name, Electronic Arts Los Angeles. It was a console-only game, while Windows players received the acclaimed Medal of Honor: Allied Assault, an entirely separate title made by 2015, Inc., the first outside developer to have worked on the series. However, EA Los Angeles did develop the Spearhead expansion for Allied Assault.

In January 2003, Electronic Arts Pacific and the remaining assets of the now-closed Westwood Studios were merged into Electronic Arts Los Angeles, and the company moved into the then-newly built compound in Los Angeles. The teams within EALA were not separately named, but the credits in titles made by the team formerly known as EA Pacific referred to them as EALA's RTS team. The reinforced studio released the Zero Hour expansion for the 2003 RTS Command & Conquer: Generals, and Medal of Honor: Rising Sun in late 2003. The second expansion pack for Medal of Honor: Allied Assault, titled Breakthrough, was developed mostly by TKO Software with EALA's input. 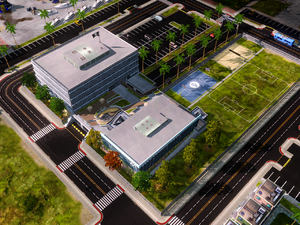 The EALA building, as seen in Red Alert 3

In 2004, the core FPS part of the studio continued released Medal of Honor: Pacific Assault for the PC and GoldenEye: Rogue Agent, while the RTS team made use of the newly acquired Lord of the Rings license, releasing The Battle for Middle-earth in December 2004, despite an announcement of Command & Conquer: Red Alert 3 sent by Mark Skaggs to Command & Conquer fansites earlier that year. Around this time, certain former EA Pacific developers left, including Mark Skaggs, and the RTS team shuffled internally. Meanwhile, the FPS team worked on Medal of Honor: European Assault for consoles only and released it in 2005.

In 2006, the RTS team released The Battle for Middle-earth II for Windows and Xbox 360, as well as the compilation Command & Conquer: The First Decade, which hinted at a new Command & Conquer title being in development in the bonus DVD shipped with every copy of the compilation. At E3 2006, a new Command & Conquer game was fully announced - Command & Conquer 3: Tiberium Wars. At the same time, an expansion for The Battle for Middle-earth II, titled The Rise of the Witch-king was outsourced to BreakAway Games with few members of the EALA RTS team supervising its development, while the rest were working on Tiberium Wars, which was ultimately released in late March 2007 for Windows, and a few months later for the Mac and Xbox 360, further evolving the way RTS games were controlled with an Xbox 360 controller. Meanwhile, the rest of the studio was working on Medal of Honor: Vanguard, Medal of Honor: Airborne and Smarty Pants.

The year 2008 was opened with the expansion for Command & Conquer 3: Tiberium Wars, called Kane's Wrath, also outsourced to BreakAway Games. Before its launch, Command & Conquer: Red Alert 3 was announced to have already been in development since the latter half of 2007, and a beta key was included in all Windows copies of Kane's Wrath. The game was ultimately released in late October 2008. A first-person shooter set in the Command & Conquer universe, called TIBERIUM, was well in development in 2008, but was ultimately cancelled by order of higher branches of Electronic Arts, with the official reason being that the game was not meeting the company's standards. By this time, at least one division within EALA focused on casual titles, having released two Brain Quest titles and the award-winning Boom Blox.

In 2009, the company started doing additional development for titles developed by other Electronic Arts' subsidiaries, such as The Lord of the Rings: Conquest, The Saboteur and The Godfather II, but also kept its own production with Boom Blox Bash Party and Command & Conquer: Red Alert 3: Uprising/Commander's Challenge.

An internal experiment in the RTS team, called Command & Conquer: Arena, was under development in late 2008 and early 2009, with a beta key for it included in the Premier Edition copies of Red Alert 3. While it was originally intended as a multiplayer-based spin-off for the Asian market, higher EA branches ordered the project to form an entire Command & Conquer sequel. Despite internal protests from the developers, including the departure of multiplayer designer Greg Black, Command & Conquer 4: Tiberian Twilight was developed in around eight months and released in March 2010 to a negative response from both critics and fans. A month prior to the game's release, certain staff members from the studio were fired.

Shortly after the release of Tiberian Twilight, Electronic Arts Los Angeles stopped existing as such, and its assets were split to two separate studios: first-person shooters were to be developed by Danger Close, while real-time strategies were assigned to Victory Games.

Danger Close released the Medal of Honor reboot in October 2010, while Victory Games only formed around that time and publicly announced itself as the successor of the Command & Conquer IP in February 2011. Danger Close is attributed to additional development on Bulletstorm, Battlefield 3, and Army of Two: The Devil's Cartel. However, after the release of the 2012 Medal of Honor: Warfighter was also unfavourably received, the studio ceased its existence as a separate entity and was renamed to DICE LA, becoming a full subsidiary of Digital Illusions CE, and has since worked on their titles such as Battlefield: Hardline (2014), Star Wars: Battlefront (2015), Battlefield 1 (2016), and Battlefield V (2018). In 2019, they assisted in designing Respawn Entertainment's Star Wars: Jedi - Fallen Order. In January 2020, Respawn Entertainment founder and CEO Vince Zampella became the studio leader, announcing that the company would once again rebrand.