An epic unit is defined as an incredibly powerful unit, often taking a long time to produce. An epic unit is able to engage and defeat entire armies of ordinary units. Only another epic (or a unit the epic cannot attack, such as air units) can fight them one-on-one with any hope of surviving, let alone winning.

They usually make use of experimental and/or classified technology, hence their considerable price. Even commanders wealthy enough to afford two or more can ordinarily only obtain one at a given time. They often require customized and dedicated infrastructure in order to produce or maintain, further adding to their cost and rarity. Epic units may announce their construction across the battlefield.

The term was first used in Command & Conquer 3: Kane's Wrath.

The Global Defense Initiative has the Mammoth Armored Reclamation Vehicle (MARV), a massive tank that also functions as a Harvester and a mobile Tiberium Refinery. It is built from the Reclamator hub.

In response, the Brotherhood of Nod manufactured the Redeemer, a massive walker, using the Rage Generator to manipulate hostile units' minds into a wild frenzy. It is built from the Redeemer Engineering Facility. 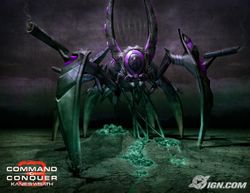 Due to the threat the MARV and Redeemer pose on the battlefield. The Scrin started deploying the Eradicator Hexapod to counter it's enemies epic units. This massive alien war machine is known to "recycle" the remains of its enemies into credits for the Scrin war effort. It is too large to be warped in through normal portals, thus it can only be brought in through Warp Chasms and announces its presence by roaring. 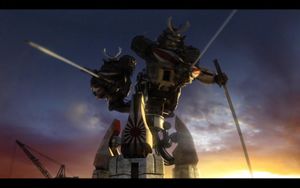 The Shogun Executioner of the Empire of the Rising Sun was the sole epic unit in the Red Alert series, able to devastate anything in its path. Even most air units were not a threat to it, as it can destroy them by simply walking into them. Unlike previously mentioned epic units, the Shogun Executioner is able to move across water. Since it was specifically designed to combat the Soviet army, it has a unique system that allows it to absorb the energy from Tesla weaponry and use it to repair itself.

Its beam katanas can destroy any and all ground forces with ease, and when surrounded, it can unleash an Omega Shockwave by driving all three katanas into the ground, devastating everything around itself.

It was a campaign-only unit, and appeared in one Uprising map as an uncontrollable enemy unit to all sides.