Establish Nod Presence is an alternative Nod mission to Protect Waste Convoys within the Nod campaign of Tiberian Sun. It nevertheless has the same goal of infecting the GDI base with chemical missiles.

The Nod base in this sector has been overrun by Tiberium life forms. Weed eaters have proven to be effective against the Tiberium creatures, but we must move reinforcements in quickly before the base is completely destroyed. Once the situation has been stabilized, the GDI base in the area must be eliminated.

﻿Despite Kane being most disappointed that his most trusted followers Slavik and Oxanna had gotten themselves captured after falling into the GDI trap that was the research facility; he decided to give them a second chance following their escape from the GDI prison camp in Norway.

Kane had new Tiberium-based 'chemical missiles' to deploy against the GDI in Europe but he needed to establish a suitable center for their manufacture and deployment. The optimal location for this would of course be Central Europe and Denmark and Germany both were up for grabs.

Germany had been a key supporter of the GDI forces during the First Tiberium War and had been briefly occupied by Nod armies before GDI forces came to its rescue; forces which some sources say included those of General Solomon although others place him in the Ukraine at the time. The Brandenburg Gate in Berlin may even have been the monument which Nod destroyed when they hacked into the GDI Ion Cannon towards the end of the war.

Despite it's crucial role in the war, or perhaps because of it, Germany was clearly left war-weary and over the inter-war period it allowed it's GDI allegiance to wane, instead going for a neutral stance, similar to that adopted by France, Denmark, Belgium and the Netherlands.

But not all it seemed had been happy to see Nod forces forced out of Germany, some time before the Second Tiberium War Nod supporters had obviously managed to organize some kind of an insurrection in Hamburg, creating a Nod base in the vicinity and were once again preparing to overthrow or forcibly subjugate the German government.

Unable to prevail with their own forces alone, the neutral German government had clearly invited the GDI to establish their own base near Hamburg but they did not allow them to establish a military zone there.

For some reason however, likely the 'diplomacy' of General Hassan, Nod were to abandon their own base near Hamburg and retreat. This left the GDI with a base in Germany but also left a nearby intact Nod base just waiting to be reoccupied.

Recently a Veinhole had emerged near the abandoned base and would threaten its continued existence. It so happened though that this was exactly what Nod needed, their Weed Eaters were designed to harvest veinholes in much the same manner that a harvester harvests tiberium in order to produce a suitable material equivalent to tiberium waste which could then be used to create chemical missiles.

A force of Nod soldiers arrived in the area from the south, unusually carrying with them a harvester and 2 weed eaters but no MCV at all. Their mission was simple enough in theory, they were to locate the abandoned Nod base somewhere to the north and defeat any GDI forces that they were weak enough to be defeated along the way, while avoiding any that were too strong.

The proceeded north over a bridge, avoiding the GDI base to the west and it's guards but still defeating the scattered GDI patrols and vehicles that got in their way, perhaps even destroying a single disruptor. It was once they were over the bridge that they arrived at a village on the outskirts of Hamburg and faced their first major challenge.

The village was well known for their Nod sympathies, probably having being involved in the earlier uprising and the Forgotten mutants had long made sport of them; they regularly terrorized the place and had already sacked many buildings.

It can be surmised that the looting and murdering of the villagers was with the collusion of their GDI allies since their base was so close by.

But the mutant 'vermin' (according to CABAL) were out of luck. This time they had managed to arrive just as Nod forces had reached the village. Sensing that they were to be punished for their atrocities, they immediately turned on Nod forces and despite the ability of their hijacker to steal vehicles, were outgunned and wiped out. The villagers predictably welcomed Anton Slavik's forces as liberators and they were promptly deemed unexpendable, meaning that Nod forces were not authorized to harm them or their buildings without receiving specific orders from Anton Slavik.

The Nod base was to the north of the village and perhaps with the help of the labor of the villagers, Anton Slavik was able to remain the base and repair it. For some reason the base already had a functional Tiberium Waste Facility and a surprisingly advanced construction yard able to construct the facilities necessary to produce even the advanced stealth tanks, artillery and flame tanks.

This was just as well however; since the GDI forces at the Hamburg base and its adjacent outposts were also highly advanced, fielding the dreaded disruptor tanks and orca bombers.

The Weed Eaters began to harvest the Veinhole threatening the base and also possibly the other Veinhole to the south-east whose expansion threatened to eventually destroy the village Nod had earlier saved from the mutants. It would not have mattered that much if the GDI or the Forgotten had destroyed any of the weed eaters before their arrival, for the base already had the facilities to create more.

By harvesting the veinholes, Nod were able to rapidly accumulate the necessary Tiberium waste substitute to quickly produce a large number of chemical missiles for use against the GDI. There are two main ways that Anton Slavik could have used them against the GDI.

He could have used them in a supporting role in order to destroy or damage key buildings, particularly fortifications, power plants and barracks in order to aid the advance of his conventional forces, or he could instead of used them to turn GDI infantry into visceroids. Once these visceroids had reached maturity they could have destroyed GDI buildings and units seemingly at random but applying unstoppable force.

But regardless, with the help of their new chemical missiles Nod were able to prevail, destroying or capturing all the buildings in the main GDI base and eliminating all of it's numerous outposts as well.  Thus GDI presence in Germany came to an end.

With the elimination of GDI's Hamburg base, Germany was defenseless before the Nod onslaught. The Nod flag now flew over Berlin for the first time since the First Tiberium War and Nod established an iron grip over northern Germany. Its great wealth, population, industry and technology were now theirs in order to exploit to strengthen their hand in Europe and worldwide.

Kane set Germany to a single task. The creation of a vast industrial base dedicated to the production of but one thing, the new tiberium based Chemical missile. These missiles would now rain tiberium death upon the GDI all over Europe. What did it matter that the GDI had secured Denmark and turned the Baltic into a GDI lake? Nod now had Germany and Germany would now become a vast factory to churn out hundreds of tiberium missiles for Nod.

Faced with this constant barrage of tiberium weaponry, GDI lines all over Europe began to falter. Poland fell, as did Oslo in Norway and Nod forces poured into Sweden. To the east a Nod controlled Russia stirred, poised to paint Europe red. Only Hammerfest stood strong, protected from attack by its impregnable firestorm barriers.

But there was still one thing that they still feared might be able to stop them. In Britain, the GDI were developing a new weapon of their own. Not a missile but an all-powerful assault-walker that more than matched its name, the Mammoth Mk. II. With Germany in their hands they would now have to invade Britain and destroy this new threat before it could multiply. 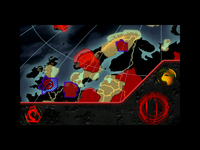 For some reason if the player takes too long to arrive at the base, the base will begin to autonomously create a force of Nod infantry, coloured red like the player's but completely beyond player control in order to demolish the village and massacre its inhabitants, which are considered non-hostile by the player.