Evacuate Delphi is the eleventh mission in the GDI campaign of Tiberian Dawn.[1] 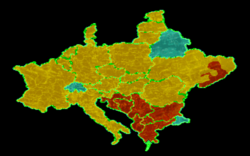 The GDI lands in Greece

Greece had once been a proud GDI country, but had become disillusioned with the organization and declared itself neutral. However, as the war dragged on, it had aligned itself with Brotherhood of Nod. Greece's defection to Nod, however, had provided an opportunity for GDI to place agents in Nod circles.

One of them, Agent Delphi, had collected valuable information on Nod, but had become unable to transmit said information. As GDI forces landed in Greece, James Solomon was sent to preside over a vitally important mission to make contact with Delphi near Corinth.

A small group of GDI Grenadiers landed on the beach but were met by fire from Turrets. An MCV was landed afterwards which allowed James Solomon to establish a base.

The evacuation of Agent Delphi, however, was not easy. Nod had built a powerful base guarding the only route between the beach and the village where Delphi was hiding, unwittingly preventing GDI forces from making contact with him. It took a protracted struggle before GDI forces were able to get through the base and meet with Agent Delphi. Having been located, a Chinook helicopter was sent to retrieve Agent Delphi.

Agent Delphi's information proved invaluable as had been expected. It provided clues as to Kane's whereabouts and also while he had been trapped in Greece he had gained much information about Nod forces there. With the help of this information GDI were able to swiftly drive Nod out of Greece and depose the government that had turned against them.