Orcastration is the tenth mission in the GDI campaign of Tiberian Dawn.[1]

GDI's victories in Hungary had placed it in a strong position to continue their offensive into Nod Europe. At the same time the Ways and Means Commitee had finally been persuaded by Mark Jamison Sheppard to reestablish GDI funding.

As GDI forces advanced past Trieste, Italy and Arad, Romania, they encountered Nod turrets guarding the valleys. These fortifications caused the GDI forces advance to grind to a halt. To get things moving again, Mark Jamison Sheppard, now back from the UN and in command once again, used his UN funding to purchase new ORCAs for the offensive.

At both locations, GDI commanders were given access to ORCAs. With the help of these crafts, they were able to clear the long valleys leading to the Nod bases of Turrets. They then proceeded to use the forces at their disposal to eliminate the Nod bases in the valleys and secure control of the areas. 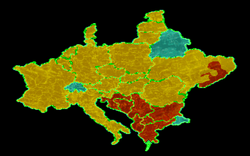 The GDI lands in Greece.

But the victory had not come without cost and the Nod forces were still strong and now enjoyed a certain amount of strategic depth. So GDI forces devised a new strategy designed to break the oncoming deadlock, to land forces in Greece and restore their control over that country. It was hoped that once Greece had been reclaimed Nod forces could be attacked on multiple fronts and finally defeated.