Final Exam is the first mission in Yuriko's campaign in Uprising.

The Allied TV channel News3 broadcast a special report on Yuriko Omega. Reporter Brenda Snow reveals that the infamous psychic commando's real name, according to some sources, was Yuriko Matsui, and that she was born in the small coastal town of Tanabe, and exhibited psychic powers since when she was still a child. She was apparently scorned by her schoolmates, and when the government learned of these powers, she was taken to the Shiro psychic research center, ran by Doctor Shinji Shimada.

Even though it was unclear what happened to Yuriko during her time at the Shiro research center, she was never the same after what she's been through. 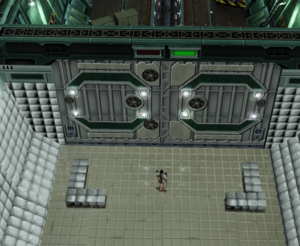 Yuriko about to leave her cell

Inside her padded cell, Yuriko was telepathically awoken by Izumi, who claimed to be her sister. She encouraged Yuriko to develop her powers and escape the Shiro Sanitarium, and the door to Yuriko's cell suddenly unlocked.

Yuriko began accessing data terminals scattered around the facility in order to regain the psionic powers that the scientists have been trying to suppress, she was telepathically contacted by Dr. Shimada, who told her that she must not leave, as "it is too dangerous".

As Yuriko fought her way through the security forces inside the facility, they became increasingly desperate, and attempted several tactics to stop her, including blocking a door using barricades and setting up ambushes using Sudden transports, though Yuriko managed to defeat all of these attempts. Throughout this, Dr. Shimada pleaded with Yuriko to stop.

At the exit to the Shiro Sanitarium, a large number of Imperial forces, including several King Onis from outside of the facility, gathered in a last ditch effort to stop Yuriko, but were all destroyed by her. However, just as she was about to escape, she was paralyzed by a squadron of Rocket angels using their paralysis whips, and subdued by Imperial reinforcements. 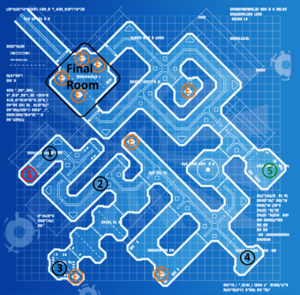 A map of the stage, with the starting location, terminals, and elevators highlighted

After turning the corner, you will be attacked by six warriors, kill them with the Psychokinetic Burst. The northeastern direction leads to a dead end, so head southwest. You will find a trauma station guarded by several Tankbusters, and several warriors will charge you from the northeast, both of which should prove no problem. Heal up at the trauma station and proceed.

The next section is guarded by several Mecha Tengus and many Tankbusters, as well as a shinobi ambush. Mind controlling the Tankbusters can prove useful. You will soon reach the second data terminal (I'm Rubber, You're Glue), which unlocks the Psionic Shield, an extremely useful ability. At this point, two Tengus will be released to attack you, test this new power on them.

Moving on from the data terminal, you will find the door to the next area blocked by a lot of random objects, so instead follow the objective arrow down to the infirmary. The infirmary is guarded by many dangerous enemies, including shinobis and Tengus, so make sure you do not activate the Shield too soon. Mind controlling some shinobis can be helpful.

At the end of the infirmary, you will find an infantry elevator which spawns enemies, as well as the third data terminal (Mind Over Matter), which unlocks Psionic Slam. Destroy the elevator to stop enemy reinforcements, then access the data terminal, after which three Tengus will enter. You can destroy them easily with your new ability, simply lift one up and slam it into another. On your way out of the infirmary, you will encounter a large group of Tankbusters, several Tsunami tanks, and shinobis, none of which should be too difficult to handle.

Return to that blocked door and remove the barricade using Psionic Slam, you will be attacked by two Steel Ronins and some infantry. The Archer maidens are particularly dangerous, so mind control them if you can. Remember that Steel Ronins cannot be lifted with Psionic Slam, though you can still slam objects into them. Before following the objective arrow, head northwest to destroy another infantry elevator.

Follow the objective arrow, and you will find three archer maidens, who have barricaded themselves near a trauma station. You can kill them by slamming their barricade into them, but the easiest way is to just use a Psychokinetic Burst. Head southwest into the vehicle bay, you will be attacked by some vehicles, including Tengus and Tsunami tanks, all of which can be easily destroyed by Psionic Slam. Destroy the vehicle elevator there to prevent reinforcements, then wait for your abilities to cooldown before proceeding.

After leaving the vehicle bay, you will be attacked by a large group of Imperial warriors hidden inside two Sudden transports, as well as a Steel Ronin. The Sudden transports are explosive, so you can slam them into the infantry or the Steel Ronin for great effect. Use the shield if you have to. After you are done, heal up at the nearby trauma station and move on.

After accessing the fourth data terminal (Do You Remember Love), you will have one point to assign for your Psionic Talent, you can choose between a speed boost, a health boost, or an attack boost. On your way out, you will be attacked by some shinobis and three Steel Ronins, take them out. After taking out two Tengus and some more shinobis, immediately stop and wait for the cooldown. The next area is extremely dangerous. 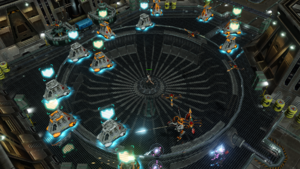 You will enter a Nanocore storage room filled with Defender-VX cores and guarded by a Steel Ronin. Attack the Steel Ronin and try to Psionic Slam any Nanocores that begin to move, as they will be much more difficult to kill once they unfurl into Defender-VX. Use your Shield to protect yourself or disable the Defender-VX turrets with your Psychokinetic Burst if necessary. Also, there are yellow explosive barrels in the area, slam them into enemies for massive damage.

After leaving the Nanocore storage, you will encounter two more Nanocores and two archer maidens. Be careful, as the archers can instantly kill you if your health is low. Use a Psychokinetic Burst to be safe. Head southeast to a small room, but make sure to take small steps, and slam any crates you see into the ground - they are disguised Sudden transports.

After dealing with the transports and the infantry they carry, access the data terminal (Not Safe for Work) in the middle of the room for another Psionic Talent point, then continue following the objective arrow. You will be attacked by a large number of infantry and some vehicles. Make use of your Shield and Domination powers to stay alive. Go to the room marked by a white square on the map, there you will find a trauma station and an infantry elevator, destroy it, then heal up and head for the final room.

The final room is filled with danger, including multiple elevators, a Defender-VX, King Onis and Steel Ronins, and many other vehicles and infantry. The key to survival is to move slowly, never taking on too many enemies at a time. First, try to demolish the elevators to prevent enemy reinforcements. Use the explosive barrels near them if necessary, either slam the into the elevators or enemy vehicles. If you find yourself surrounded, use Shield to protect yourself, then kill or disable the surrounding enemies with a Psychokinetic Burst. The Defender in the center of the room is dangerous, but can be instantly killed with an explosive barrel.

After clearing the room, head for the exit to finish the mission.