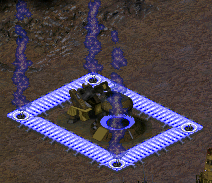 The Firestorm Barrier Defense System is a technologically advanced military defense technology, developed by the Global Defense Initiative in the 21st Century.

The system is based on a network of wall sections that were connected to a firestorm generator. These panels discharged a continuous, impassable, and destructive energy field above them, high enough to even destroy incoming missile and aircraft, although it cannot provide "roof" protection (the field cannot bend inward or outward since is a vertical electromagnetic "wall" where charged plasma atoms run up and down) as smart cruise missile can adapt to its pattern and seek an opening (in the sky) on it. The field was impenetrable to any ordnance and impassable to any unit, except for Nod's subterranean vehicles or a specific energy based weapon. Any unit that was located on a Firestorm Defense panel when it was activated was immediately destroyed.

The Firestorm Defense project was used as Hammerfest's primary (and only) defense grid, making the base impenetrable. While an effective defense, the generators could only store a limited amount of energy, and the Firestorm Defense barrier could only be active for a limited period of time. It was also very expensive to deploy and maintain. For these reasons, GDI discontinued the project.

CABAL also used Firestorm Barriers to defend his core, along with the Obelisk of Darkness and CABAL Obelisk. CABAL may have acquired blueprints to this technology during the period of time Hammerfest had fallen under Nod control. The technology seems to have been improved, providing CABAL with continuously deployed as it require no energy recharge. 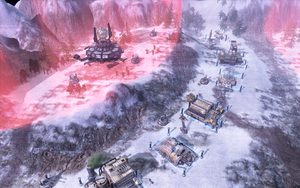 A modified and enhanced version of the technology was used by ZOCOM to protect the Rocky Mountains Complex after the Third Tiberium War. The complex contained the Tacitus and the lab responsible for studying it, and keeping it safe was considered important enough to justify the high cost of keeping up the barriers.

The Cheyenne Mountain barriers are in many ways superior to the old ones, and a lot of technological improvements have been made since the technology was developed in the Second Tiberium War. The new technology allows the barriers to be active for an unlimited period of time, and the energy barriers themselves are no longer dependent on a network of wall sections in order to stay up. The only building needed to maintain the energy field is the control center. However, the new systems are entirely dependent on the control hub, and if it was seized by an enemy force, they would be able to gain access to the systems and shut the barriers down.

Despite the extensive security measures the GDI took, the Nod AI LEGION was able to defeat the GDI forces surrounding the complex using the cybernetic soldiers of the Marked of Kane. LEGION gained access to the control hub, and was able to hack the systems, and disable the Firestorm barriers around the Rocky Mountains complex. Without the barriers to protect the complex, it was soon captured by the AI, and the Tacitus was brought back under Kane's control.

The firestorm barrier an impenetrable and indestructible wall of defense. When activated, it can block (or more likely, destroy) anything that attempts to go through the barrier, ranging from aircraft returning from an attack run and mundane rockets to Nod IRBMs. Some weapons can fire through the defence barrier. Most notably GDI Disruptors and the Obelisk of Light. Also, the Hunter-Seeker droid can overload the system and turn off the shield upon impact, and the Titan's cannon can be used to destroy wall section.

There are a few downsides to the system: the firestorm walls have to be built piece by piece around a GDI base. The Firestorm Generator is also expensive, costing as much as a Refinery. The barrier effect is temporary, requiring time to recharge in between use. EMP based weapon can shut down the the energy field (even the entire system) within its blast range. Construction range is limited by land contour and construction area limit. Area with different height may not be suitable as wall section will not be linked. Firestorm may disable some structure that requires energy, the barrier included.

In unpatched version (V1.08 and earlier) of Tiberian Sun, if the host base is powered down during Firestorm activation period, the Firestorm will last forever until power is restored.