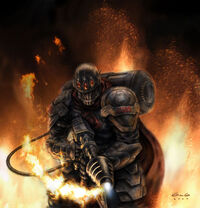 Various fire based weapons have been present in human warfare ever since we learned to create it. Modern warfare is no exception. The first mass scale use of flame weapons was in Second World War, when the USSR extensively used flamethrower infantry and flame towers in their army. Following the conclusion of the war, flame weapons were prohibited as being inhumane. The Brotherhood of Nod disregarded such limitations and adopted them as an important part of their arsenal. Flamethrowers are powerful against infantry and structures, and are an effective means of eliminating enemy garrisoned buildings.

In the First Tiberium War, Nod deployed flamethrower infantry squads against buildings and other soldiers and also unleashed one of the most horrifyingly effective weapons in the conflict: the flame tanks. GDI also used incendiary bombs, typically dropped from A-10 Warthogs to a deadly effect against enemy units (Though pressure from humanitarian groups led GDI to abandon firebombs once the war ended). Both Nod and GDI flame weapons had been fueled by napalm, an extremely flammable jelly like substance that clung to anything it touched after deployment.

In the Second and Third Tiberium Wars Nod upgraded their arsenal of flame weapons, resulting eventually in the creation of a powerful Tiberium based fuel for their flamethrowers, allowing an unprecedented power of these weapons and effectiveness, to the point of being able to burn through a garrisoned structure killing all infantry inside. In particular, the Black Hand extensively used flame weaponry; their standard Troopers and Purifier Warmech being notable examples of this fascination. The Black Hand has also researched the Purifying flame, an even more powerful fuel mixture that vastly increases the burn temperature, and therefore, the damage. This upgrade will be a threat to all ground units.

Despite its terrifying nature, flame weaponry is not without flaws. Generally it is short ranged; exposing the user to fire until it can close the distance. Additionally, it is usually unable to severely damage enemy vehicles; making the users weak against conventional tanks. However, the Black Hand's purifying flame is an exception, and can easily melt through even Mammoth 27 armor.

In the Fourth Tiberium War the Flame Tank and the Black Hand still uses flame weaponry.

In C&C games, all factions that use the colour red use flame weaponry at one point, notably the Soviet Union, the Brotherhood of Nod and China.