Rocketeers, such as in the image, are equipped with flight suits.

Flight Suits are a type of flying armour developed by the Allies for the Rocketeer in WWIII. This suit grants the user anti-gravity flight through its jetpack and is armed with machine guns capable of piercing through hostile infantry squads. Unfortunately, it is thinly armored and is highly susceptible to enemy AA fire. 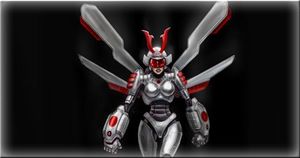 Flight suits are a type of flying armour developed by the Empire of the Rising Sun exclusively for Rocket Angels. The designs of these suits greatly resemble angels, hence the unit's name. A typical flight suit is armed with Photon rocket swarm-pods and a Paralysis whip.

A major weakness to both flight suits is their relatively light armor, making them vulnerable against anti-air weapons.