Fort Bradley was an Allied military base located in New York City during the Third World War.

A military base of the same name also exists in New York in the new timeline created by Anatoly Cherdenko's time travel.

During the initial stages of the Soviet invasion of the United States, Manhattan Island was attacked by an amphibious landing force, and Fort Bradley became the last Allied holdout in the region. However, the commlink with the Fort was cut off, so Special Agent Tanya, under the command of an Allied Commander, was tasked with reestablishing communications with the base.

Once Tanya and a squad of GIs reached the base, communications was successfully restored, and control of the base was transferred to the Commander. From Fort Bradley, the Commander launched an attack on a nearby Soviet supply base, destroying it completely. The destruction of the Soviet base successfully blunted the Soviet invasion of New York. 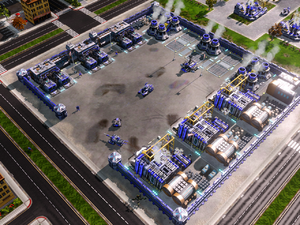 Fort Bradley, in the altered timeline

Fort Bradley was still present in the new timeline created by the assassination of Albert Einstein. Allied Peacekeepers and Special Agent Tanya were known to be trained there.

During the Soviet attack on the Statue of Liberty, Fort Bradley defended New York once again. The Soviet forces managed to distract the Fort personnel by destroying its Prospectors using Terror drones. This allowed Soviet reinforcements to arrive in New York, including Kirov Airships and experimental Tesla tanks, who proceed to completely wipe out the Fort.