He is most noted for his track Hell March and voiceover for the commando from the original Command & Conquer.

Born to a family of musicians of Polish and Italian descent, Klepacki had drawing and music as his hobbies, with the latter eventually prevailing, receiving him his first drumset at the age of 8 and his first professional performance at 11. Learning to program in BASIC on a Tandy 1000 got him interested in computer games.

Klepacki joined Westwood in 1991, having applied as a game tester for DragonStrike a year earlier. He was later employed as a music composer, debuting in Eye of the Beholder II: The Legend of Darkmoon in 1991, and later composing for Dune II: The Building of a Dynasty. In 1994, Frank Klepacki composed music for the first Command & Conquer game, being the first to implement such a music style in a video game. At the time, he was a drummer in the band called I AM and has provided their song Destructible Times as the Nod ending credits theme. A year later, he composed music for the first Red Alert game. His composition Hell March won him the 1996 PC Gamer Magazine award in the Best Game Soundtrack competition, over Quake's Trent Reznor. He also compose the soundtrack of Dune 2000, which, among other tracks, had remakes of certain Dune II tracks.

By 1999, Klepacki was joined by Jarrid Mendelson as a mentee, with whom he worked on the soundtrack for Tiberian Sun. Klepacki continued to work alone on Firestorm, Nox, Red Alert 2, Yuri's Revenge and Renegade, and shared the composition credits on Emperor: Battle for Dune with Jarrid Mendelson and David Arkenstone. In 2002, prior to Westwood's shutdown, he composed for their last two games - Pirates: Legend of the Black Kat and Earth and Beyond. He composed only one demo track for Command & Conquer: Generals, which was not featured in the final game.

In 2004, Klepacki joined Petroglyph Games, scoring for their 2006 game Star Wars: Empire At War, along with the Forces of Corruption expansion pack. He set his roots in the studio and continued to work there. Later he composed music for Universe at War: Earth Assault, Panzer General: Allied Assault, Rise of Immortals, Guardians of Graxia, Mytheon, End of Nations, Victory (a cancelled game), Grey Goo, the cancelled Victory Command, 8-Bit Armies and its expansion packs, and Forged Battalion.

In 2007, Frank Klepacki was called to compose for Command & Conquer 3: Tiberium Wars, but he was already busy with Universe at War: Earth Assault at Petroglyph. He was replaced by Steve Jablonsky and Trevor Morris.

In 2008, he was called again to compose for Red Alert 3. He accepted the job, and remixed his Hell March track for the second time and Grinder for the first time, in addition to a new track, Nuclear Death (which was ultimately shortened and titled Red Menace). He continued his work with Uprising in 2009, making three new tracks, all of them being Soviet combat theme variations.

On 6 January 2019, he performed a selection of Command & Conquer tracks at MAGFest with the band The Tiberian Sons, also announcing an album collaboration with them. In the same year, he spoke with other former Westwood Studios staff at the Command & Conquer post-mortem panel at GDC 2019.

Right after Westwood dissolved, Klepacki guested in two studios - Opus Corp. and Impulse Games, composing for the 2004 UFC Sudden Impact and the 2005 MX World Tour. He also composed for JV Games' Pong Toss: Frat Party Games (2008) and Playlogic's Fairytale Fights (2009). He played at the HBO Emmy Party, produced by Jarrid Mendelson, in 2014, 2015 and 2016.

In 1992, Klepacki was the voice actor of the House Harkonnen in Dune II: The Building of a Dynasty.

In 1995, Klepacki played a Netrunner at the ending of the Nod campaign in the original Command & Conquer. He is the one to the right side, who was killed by an automated defense system. He also provided the iconic voice acting for the commando in the same game. The next year, he reprised the role of the commando in Sole Survivor as one of the selectable EVA soundbanks.

Klepacki as a Soviet guard

In 1996, he played a Soviet guard in Red Alert, who was killed by an infiltrator (played by Joe Kucan) while trying to light a cigarette, as well as an unnamed general in the final Allied briefing.

In 1998, he reprised his role of the House Harkonnen voice-actor in Dune 2000, in addition to the Ordos serviceman-spy.

In other games, he was the voice-actor in the 1993 Lands of Lore, 2006 Star Wars: Forces of Corruption and the 2007 Universe at War: Earth Assault. 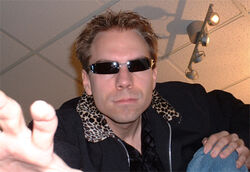 Klepacki on a photo in his album Morphscape

Frank Klepacki has composed and/or recorded music outside video games.