Free Rebel Commander is an optional mission that can be taken before attacking Hassan's fortress.

We have become aware of an imprisoned commander in this region who WAS loyal to Hassan. Free him and his forces and they should be sympathetic to our cause - and help in the capture of Hassan. The commander may have information vital to Hassan's movement.

The fall of Libya to Anton Slavik's rebel forces had opened the way for a rebel advance into Egypt, the core part of the loyalist territory.  Ans loss of the Nod News Network to rebel forces during the Battle of Benghazi had incited wipespread unrest and chaos throughout Egypt.

The option of advancing directly on Hassan's temple and finishing him off now presented itself.  However despite the destruction of his elite guard General Hassan still possessed plenty of supporters. These supporters had likely remembered the carnage of the First Tiberium War between Nod and GDI and correctly understood that Anton Slavik's victory would lead to a second war; having no wish to see this happen.

In order to secure his rule General Hassan had earlier imprisoned a certain general and potential rival of his in a prison towards the west of Egypt.  While apparently loyal at the time, his or her popularity, skill and prestige had made him or her a threat to Hassan's rule.  It is possible that this general was actually the very same Nod leader that had made such a contribution to Nod's African campaign during the First Tiberium War.

While the release of this man or woman would not sway the massed ranks of Nod loyalists guarding Hassan's temple, he or she still possessed a following within the Nod military which saught his or her release. Were Anton Slavik to free him or her from his or her prison, these followers would join the rebel ranks and strengthen the assault on General Hassan central base.

The prison proved to be better guarded than had been anticipated and the forces that Anton Slavik had sent to complete the mission it turned out could not hope to prevail against the base and its Laser turrets in a frontal assault.  They would have to take a less direct approach.

At the time of their arrival the loyalist guards were executing some rebel supporting civilians and there was nothing Anton Slavik could have done to stop them. Proceeding towards an old tunnel the rebel forces encountered armed GDI prisoners which had somehow escaped earlier and were fighting with loyalist guards. Both sides were eliminated by the rebel forces and they discovered that the tunnel led to a back entrance to the prisons supply base which unlike the main prison was poorly guarded and was connected to it by a bridge.

Nod loyalists had recently taken prisoner a number of Engineers loyal to the rebels.  By releasing these engineers from their prison trucks, the rebels were able to take control of the base and use it to assemble a force sufficient to fight their way across the bridge into the main prison.

Having crossed the bridge they overrun the prison and released the captured general who was then able to escape the area in a Harpy. 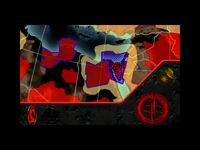 The freed general successfully made his way to safety aboard the Harpy that the rebels had provided him or her. Having been so released he or she was able to broadcast a message to his or her supporters using the Nod News Network. These supporters swiftly rose up and helped establish rebel control over most of western Egypt.

Afterwards, as Anton Slavik began to assemble and organise his or her forces for the assault on General Hassan's main base near Cairo, the freed general assigned some of his or her own forces to reinforce Anton Slavik troops by means of Subterranean APCs.

But aside from this it is sadly not known what accomplishments the freed general would go on to achieve after his or her release from prison.  He or she could have gone into retirement or he or she could have won great victories for Nod during the Second Tiberium War and beyond or was defeated and captured or killed.

If the player kills Hassan's troop guard near the tunnel and does not attack the GDI light infantry, the latter will enter a nearby Orca Bomber and destroy a Tick Tank at the opposite side of the tunnel before fly off the map.