FutureTech Corporation is an Amsterdam-based technology firm operating within Allied jurisdiction. It was responsible for developing many of the technologies used in the Allied arsenal during the Third World War.

FutureTech was responsible for much of the Allies technological superiority during the war, being the creator of the revolutionary Chronosphere device,[2] as well as a number of similar Chrono technology, such as Agent Tanya's Time Belt.[3]

They also invented the powerful Spectrum weapons, capable of cutting through any known substance, as well as the Gap Generator, capable of disguising its user as an innocuous object. These innovations were incorporated into the Mirage tanks, an advanced tank of French design.[4]

Another unusual weapon they developed was the Cryocopter, equipped with a customized "cryobeam", these helicopters are capable of flash-freezing enemy units, making them so brittle that even small arms fire can shatter a battle tank. It is also loaded with a S.H.R.I.N.K. beam, a strange device capable of compressing the molecular bonds in an object, causing affected units to shrink in size, yet conserving their energy in such a way that they become faster, rather than slower.[5] 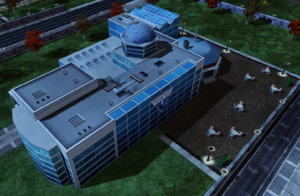 Having conquered the USSR, the Empire of the Rising Sun prepared to finish off the Allies. Imperial forces converged on Amsterdam and the FutureTech research center.

Doctor Gregor Zelinsky, having escaped to the Allies from the Soviet Union, was present working on the Chronosphere prototype. In an attempt to stop the Imperial advance, Zelinsky used the Chronosphere to unleash a catastrophic effect that destroyed both nearby Allied and Imperial forces in the area.

However it was not enough. Imperial forces were reinforced by Yoshiro's elite troops and they made the final push on the laboratory before destroying it, ensuring the Empire's victory.[6]

FutureTech's technologies contributed greatly to the Allied war effort, saving untold millions of lives.[7] After the end of the war, it quickly rose to prominence, becoming the world's largest technology firm,[8] as well as one of the world's leading private defense firms.[9]

Despite the end of the war, post-war conflicts are still rife across the world. Therefore, FutureTech, working closely with the Allies, developed several advanced prototype weapons for the Allied military. Including the computer-operated Future Tank X-1[7], the Harbinger gunship[10], the Legionnaire Initiative[11], and the Pacifier FAV.[12]

However, beneath their facade lies something far more sinister. Taking advantage of the post-war chaos, FutureTech conducted a series of immoral acts across the world. Such as forcing kidnapped Soviet scientists to design weapons for them,[13] and performing human experiments on civilians.[8]

They also began work on their most ambitious project: the Sigma Harmonizer. Despite protests and public concerns regarding its true purpose, the project was soon nearing completion thanks to the support of European Union President, Rupert Thornley. However, Thornley secretly planned to use the Sigma Harmonizer to destroy the Soviet resistance and take over the world. Fortunately, his plans were thwarted by a Soviet resistance leader, and FutureTech suffered a serious PR backlash.[14]

Throughout the post-war period, FutureTech sent its own private military forces, led by an unnamed commander, to secretly collect military technology from all three world powers for unknown purposes. Though the Commander was forced to deal with some of the most brilliant field commanders in the world, he was ultimately successful in his mission.[15]