Too many brave men and women of the Allied Nations gave their lives in the war, in service to their nations, families, and friends. While the Allies may have prevailed against the Soviet Union and the Empire of the Rising Sun, the cost in blood and treasure was extraordinarily high. Now the Allies and all the nations of the world must find a way to move past this, while treasuring the memory of those who made the ultimate sacrifice. FutureTech Corporation, the Netherlands-based technology firm behind many of the Allies' most advanced weapons, certainly appears to be doing its part. After all, FutureTech is hard at work putting the finishing touches on an advanced computer-controlled tank, which promises to revolutionize future warfare both by deterring violent situations and reducing the loss of human life. A public unveiling of the so-called "FutureTank" prototype is planned for next year, though early reports are as detailed as they are promising. 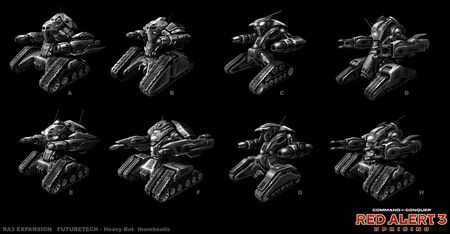 Meet the FutureTank, the future of unmanned law enforcement. It promises to be the biggest and smartest element of the next generation of Allied forces. (Early concepts)

The FutureTank is based on proprietary technology developed by FutureTech Corporation, and is powered by one of the very same Collider fuel cells used in its most efficient drive trains and power plants. But unlike all the military-grade vehicles in the Allied arsenal, the FutureTank takes a few notes from the finest Soviet and Imperial vehicle designs. Specifically, with the FutureTank X-1 prototype, FutureTech Corporation sought to combine its own best expertise with the rugged durability and power of Soviet armor, and the advanced artificial intelligence (A.I.) found only in some of the Empire of the Rising Sun's forces. The result is a marvel of high-tech engineering, an all-terrain vehicle that achieves the long-sought-after goal of functioning without a live pilot. While this may sound unbelievable, more and more eyewitness accounts and hands-on demonstrations of the FutureTank continue reinforcing the idea that this vehicle truly is capable of operating and "thinking" on its own. It can even engage in conversation in more than 14 different languages, although the FutureTank is said to have a rather gruff personality.

Much has already been said on the topic of ethics and artificial intelligence, and FutureTech has anticipated concerns on this front. Because the FutureTank is capable of making decisions without human intervention, and possesses some of the most powerful anti-armor weapons ever made, one can begin to imagine the types of precautions and safety measures taken to ensure the FutureTank's compliance with international regulations. For starters, both Allied High Command and FutureTech Corporation possess instant-access codes that can permanently disable one or all FutureTank units in a situation where such a drastic action becomes necessary. More importantly, FutureTanks are programmed with a clear set of directives that they must obey at all times, which limit their use of lethal force only to situations in which they are significantly threatened, and prevent FutureTanks from crossing international borders without prior approval. These directives were co-developed by the administrators of the European Union International Peace Prize, the FutureTech Board of Directors, and councilmen from Allied High Command, under supervision from a third-party international council for ethical software development. At any rate, FutureTech Corporation claims its latest vehicle is far less fallible when it comes to combat-related judgment calls than human beings are. FutureTanks have friend-or-foe designation that all but eliminates friendly-fire incidents, and are naturally immune to battlefield stress and fatigue. 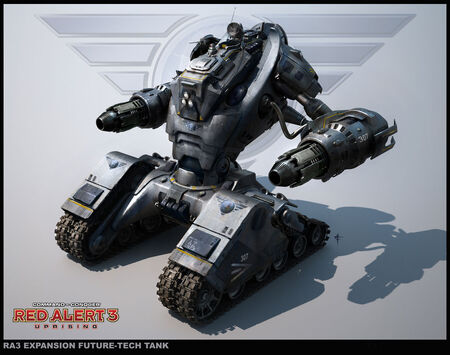 When you say 'jump', the FutureTank says, 'Unfortunately I cannot'. This may be its only shortcoming.

The FutureTank X-1 prototype may sound too good to be true, and indeed, the vehicle is still in development. Presently, FutureTech is working out the remaining kinks in the vehicle's dispositional A.I., its locomotors and pathfinding cores, and its overall production process (the prototype is prohibitively expensive for mass production). But these types of issues seem relatively minor in comparison to the incredible accomplishments apparent in the work-in-progress version.

FutureTech Corporation made a huge impact on the Allied war effort in the past, saving untold millions of lives. Judging by the progress demonstrated in the FutureTank program, the best is yet to come.

Battlefield reconnaissance has revealed at least these facts about Future Tank X-1: