The GAU-3 Eliminator is an assault rifle used by GDI infantry in the First Tiberium War.

It was replaced by the Cobretti AR-70 in the closing stages of the war and eventually the M16 Mk. II. However, Nod militant, even in 2047, continue to use the weapon, a testament to its effectiveness[2]. 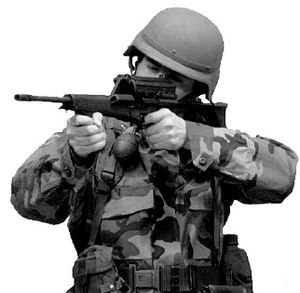 Although consistently referred to as a chain gun in the game's manual and files, the weapon is portrayed by a 9mm Calico M950/M951 submachine gun both in cutscenes, game art and sprites. There is also some inconsistency, as some of the cutscenes and images show it as the mentioned Calico M950/951, while others simply show the M16. (though the game manual state that both GAU-3s and M-16s were used by GDI infantry)

In-game behaviour suggest that the rifle is fired usually in short bursts, either because of having a short burst firing mode, or because of soldiers being specifically trained to fire in short bursts to improve accuracy, as it is happening in most of the real world armed forces. While only the GDI's "minigunners" were stated to use GAU-3s in Tiberian Dawn (Nod's counterpart were stated to use older M-16s), both sides' units in-game stats were the same.