The GDSS Philadelphia is an orbital command station that acts as the primary command and control center for GDI forces worldwide. While the station's function is strategic command, with global command posts interfacing with its EVA unit, it can also provide limited tactical support, as it is capable of deploying drop pods.

At some point prior to the Second Tiberium War, GDI constructed the Philadelphia to act as its military headquarters.

The unveiling ceremony of the Disruptor was broadcast from the Philadelphia to over fifty countries.[1] 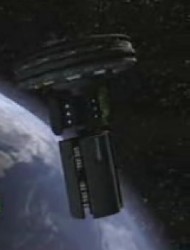 On September 2nd, 2030, aboard the Philadelphia, GDI General James Solomon received reports of multiple GDI bases under attack by Nod forces. He was interrupted by a taunting message from Kane, previously thought to be dead.

In response, Solomon contacted Commander Michael McNeil. He told him about Kane's return and ordered him to retake Phoenix Base, deploying elite drop troops from the Philadelphia to support him. For the remainder of the war, the Philadelphia provided directives and reinforcements for McNeil and presumably other GDI commanders.

During McNeil's assault on Kane's headquarters in Cairo, Nod forces attempted to destroy the Philadelphia with three ICBM launchers. Fortunately, McNeil destroyed them before they could lock onto the station.

During the Firestorm Conflict, global ion particle activity severed the link between GDI forces and their orbital assets, including the Philadelphia. GDI global command was assumed by Southern Cross until the conditions passed. After CABAL's defeat, contact with the Philadelphia was reestablished.

Following the Firestorm Conflict, GDI's space technology raced ahead. The Philadelphia was dramatically expanded and upgraded, protected by the most advanced ASAT/ABM system in history.[2] However, the control center for this system was located at a ground-based facility, since constructing a new orbital platform for the control center would cost tens of billions of credits.[3]

This decision proved to be a fatal mistake: Nod learned of this weakness and launched a surprise attack on Goddard Space Center, a weakly defended installation where the A-SAT control center was located and destroyed it. While GDI's leaders gathered on the Philadelphia for the Annual Energy Summit, Nod launched a nuclear missile at the now defenseless Philadelphia, destroying it and killing almost the entirety of GDI's leadership.[4]

With GDI's ion cannons offline and its chain of command thrown into chaos, Nod forces worldwide launched a simultaneous attack on every Blue Zone, starting the Third Tiberium War.[5]