The GST Tzadik is was a Global Stratospheric Transport and the command ship of Colonel Louise James and, by extension, the entire First Fleet.

The Tzadik is part of a fleet of similar craft, carrying GDI troops and ordnance, ready to respond to any threat, anywhere on the globe in minutes.

Commander Parker begins his new tour of duty after regaining eyesight on the Tzadik, under command of Col. James. Here, he is introduced to Nash, a sergeant he saved on the GST Methuselah. It is on the Tzadik that the commander makes the choice to follow either Kane or James.

If he sides with Louise James, the carrier becomes a powerful tool in James's personal war against Kane. Its importance prompts Nod loyalists to shoot it down, forcing a crash landing in the Tin City area. When it is reactivated and flies off, James insists that Kane is a threat to GDI General Secretary Evelyn Rios and General Wesley Riggs, but when her warnings fall on deaf ears, she declares martial law and the Tzadik heads to New Adana, to facilitate a coup.

Ultimately, the stunt proves unsuccessful, as the Tzadik is boarded by GDI marines under the direct command of General Riggs and its crew is arrested. The Tzadik, along with Commander Parker, is impounded in a supermax prison facility inside the Arctic Circle, however, when agent Duquette springs the commander from custody, Parker liberates it and flees, to battle Kane in Italy. 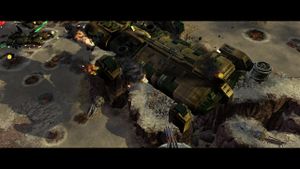 The GST Tzadik is shot down over Tin City by Nod forces in The Harder They Fall.

In the Nod campaign, the GST Tzadik appears in the mission The Harder They Fall flying over Tin City, where the commander is supposed to shoot it out of the sky, rendering James harmless (a miscalculation, to say the least). The Tzadik had heavy protection from the GDI airforce but it still came crashing down after taking much of the damage.

Tzadik (Hebrew: צדיק‎, "righteous one;" pl. tzadikim) is a title which is generally given to those who are considered to be righteous such as a spiritual master or rebbe. The root of the word tzadik, is tzedek (צדק), which means justice or righteousness. This term thus refers to one who pursues justice.