Garrisoning is a tactic used in urban combat. As high ground and cover are both effective measures to protect infantry, commanders often choose to send their troops inside neutral or friendly buildings whenever possible, vastly increasing their survivability.

Garrisoning trades mobility for increases the chance of survival for infantry, as most units will have to deal with the building before the infantry. A few missile soldiers e.g. Missile Defenders, along with some anti-infantry support like scouts, can be extremely useful against all comers of enemy tanks, aircraft and vehicles.

A trained group of infantry, other than GLA Angry Mobs, can easily turn a civilian structure into a makeshift fortress, keeping them safe, at least as long as the structure stands; in order to increase the longevity of a building, generals may order their construction dozers or workers to repair and maintain it.

A civilian building is open to garrison to all sides, as long as an enemy doesn't garrison it first. Usually, up to 8 (Generals) or 10 (Zero Hour) soldiers can occupy one building. Larger building generally has more health and allows its occupants to cover more grounds, while smaller buildings sometimes can only houses fewer infantry.

GLA's expert mercenary, Jarmen Kell, and the American Pathfinders could garrison a building without being noticed.

As a downside, Missile Defenders cannot use laser locking ability while inside a building, Pathfinders and Black Lotus will also lose their stealth detection capability, Hackers, Black Lotus, Worker, Terrorist, Hijacker, Saboteurs also becomes useless, thus garrisoning for them should be used as temporary protection rather than long term defense.

Red Guards, Tank Hunters and Mini Gunners cannot grant horde bonus when garrisoned, but they will keep the horde bonus they had when entering a building, thus it's advantageous to gather them around the building and put them in all at once before the horde bonus fades. They still need to exit and reenter the building to get the bonus from nationalism or patriotism if the technology is researched while they are inside.

The Chinese Internet Center and GLA Tunnel Network and Toxin Network can also be garrisoned, but they are used for hacking, transport and healing/repairing rather than defense, and does not allow garrisons to fire from inside.

Compare to civilian structures, these specifically built fortifications are sturdier, and can keep its occupants inside until it is destroyed, Bunkers, Fortified Bunkers, Palaces, Tunnel Network and Toxin Network are also equipped with ABC defense and can shield its occupants from anything other than Bunker Busters and Neutron Shells. Fire Bases, however, are open air and leaves its occupants vulnerable, but the cannon can keep firing even when the garrisons are killed. 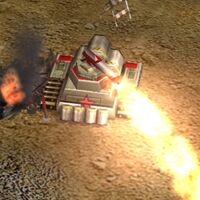 Though garrisoning a building is an effective defense certain units like the Dragon Tank will be a serious problem to it unless it is destroyed quickly.

The simplest method to deal with occupants is to destroy the building itself, this prevents the enemy from ever using the building again, but the escaped infantry can scatter and keep fighting, or enter another nearby building. To quickly eliminate the infantry or keep the building for future use, specific weapons must be employed.

There are a variety of counters to garrisoning. For the USA, Rangers work well both when upgraded with Flash-Bang Grenades or rappelling from a Chinook. The Microwave Tank can burn the garrisoned infantry without damaging the building. Also, the Nighthawk can kill garrisoned forces when upgraded with Bunker Busters, even units garrisoned in Tunnel Networks. Chinese Dragon Tanks and GLA Toxin Tractors can get rid of a building of its infantry enemies with fire or toxins.

Any artillery could outrange and destroy the building, without being countered himself. The Nuke cannon could be upgraded with Neutron Shells, killing all infantry instantly and leaving the building intact.

Several vehicles are also capable of holding infantry and allows them to fire from the inside.