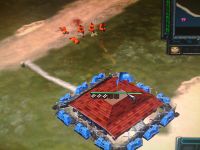 Peacekeepers have the advantage against those conscripts.

Garrisoning is a tactic used in urban combat. As high ground and cover are both effective measures to protect infantry, commanders often choose to send their troops inside buildings whenever possible, vastly increasing their survivability. A trained group of infantry can easily turn a civilian structure into a makeshift fortress, keeping them safe, at least as long as the structure stands. The number of infantry that can be garrisoned inside a building depends vastly upon the building's size.

Only basic infantry, such as conscripts and GIs are prepared to garrison buildings, as while their more advanced contemporaries were receiving training in advanced weapons systems, they were being trained to make the most of basic automatic weapons. Also, during the Psychic Dominator Disaster, Yuri's Initiates could carry out this procedure. The Soviets were also capable of building Battle Bunkers, a garrisonable structure that only requires a Construction Yard.

However, garrisoning is not a flawless strategy. First, units with extremely long range, such as the V3 rocket launcher can strike a garrisoned building from long range, allowing it to be untouchable by the defenders. Also, garrisoning troops are not equipped to deal with airborne threats; given the time, any aircraft can destroy a garrisoned building. Finally, failing any other strategy, even the most tightly defended garrison will fall if enough tanks roll in for engagement. Luckily engineers can repair it. 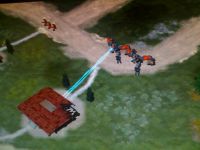 To deal with Garrisons destroy the Structure, use Molotov cocktails, Rush Imperial Warriors or Peacekeepers into it.

Combat engineers may create battle bunkers for Soviet troops to gain the advantage against Peacekeepers. All infantry except dogs or bears can garrison structures and the Garrisons will hold between 1 to 10 infantry.

Also Civilian Buildings can't be repaired and again certain long range destructive units are known to level those Garrisons from a safe distance.

The Soviet Desolator Airstrike and the Conscripts' Molotov Cocktails will clear even garrisoned structures and manned Multigunner turrets.