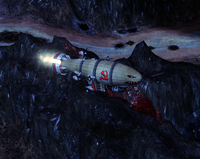 The Soviet Union's Kirov Airship Fleet is feared around the world for its strength and its devastating payload of high-explosive bombs. Nevertheless, the mighty Airship has one significant drawback: its extremely slow speed. Although this is a constant annoyance for Soviet Air Force commanders, the Soviets has failed to find a suitable faster engine for the Kirovs. During the Third World War, Kirov manufacturer Krasna Aerospace came up with the next best thing - Gastroburners.

Gastroburners are the Kirov Airship's special ability. Kirov pilots have the authority to release a special fuel into the mighty airship's engine block. The addition of this toxic cocktail of chemicals provide the Kirovs with a significant speed boost, should the pilot needed it. Kirov pilots are however instructed to use Gastroburners sparingly; the chemical fuel slowly corrodes the insides of the airship, and excessive use can bring a Kirov down.