The gattling(sic) cannon is an anti-air/anti-surface base defence used by Yuri's Army in Command & Conquer: Red Alert 2 - Yuri's Revenge. 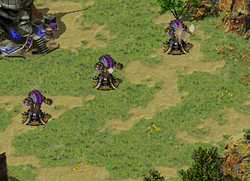 The three firing speeds of a gattling cannon

The name comes from the term "gatling gun": the cannons are armed with a pair of these lethal weapons. Firing a high-caliber slug with a tremendous muzzle velocity, the cannons can target both ground units and aircraft.

Deployed at various Yuri bases worldwide, these structures are staples of Yuri's defensive networks. Notably, they made up the defence of the psychic dominators on Alcatraz Island and Antarctica.

Gattling cannons take a while to "spin up"; in other words, it takes some time for the cannons to reach their maximum rate of fire and, therefore, their maximum damage potential. This means that while the cannon is adequate to deal with light infantry and aircraft initially, it has to survive a prolonged period of sustained firing to be able to significantly damage vehicles.

However, their range is relatively short. They are vulnerable to larger tank battalions due to their low damage output to vehicles in short-duration fire, and are outranged by artillery.