These light vehicles are very effective at mowing down both Soviet and Allied infantry quickly and also serve as an air defense unit. Although they can do some damage to lighter vehicles, such as Allied IFVs, and some lighter tanks as well, they were not nearly as effective against heavier tanks, such as Apocalypse tanks or Grizzly tanks. 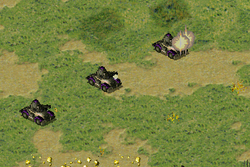 The three firing speeds of a gattling tank

The idea behind the Gattling tank's weaponry, however, seems to have been quantity, not quality. Although, this is not really the case, as the Gattling Tank boasts both incredible firepower and a minimal cost. The longer a Gattling tank fires, the faster the gattling guns spin. Eventually, the sheer number of bullets flying through the air shred through almost anything, regardless of how durable it is.

They are also very inexpensive, and large numbers of them are available to Yuri's forces for this reason. Large groups of Gattling tanks are quite a formidable enemy, as massive volumes of fire negated armour and a large enough group of these vehicles effectively had no weakness, except long-range ships and artillery units. However, since they can shoot down the aircraft from aircraft carriers, and the missiles of a dreadnought, Boomer submarine and V3 launcher, even this was not much of a vulnerability. In addition, Gattling tanks are fairly fast and cheap, allowing them to be massed with a minimal cost and labour.