General James Solomon is an American army officer who is the Chief Commander of the Global Defense Initiative during the Second Tiberium War. He was a noted field commander in the First Tiberium War and was the player character in the original Command & Conquer.

He graduated from West Point[2] and completed the US Army Ranger School programme,[3] and after serving in the US military, transferred to the Global Defense Initiative in the late 1990s, as a very competent officer, immediately receiving orders straight from GDI supreme commander Mark Sheppard and colonels J.C. Carter and M.O. Morelli.[4]

Throughout the campaign, his forces struck one blow after another against the Nod forces, while he himself managed to avoid silencing by a Nod Fate Squad when Kane's intelligence gathering forces managed to pinpoint his home. Shortly before the war, soldiers under his command attacked a Nod bio-research facility and saved the test subjects (among them Michael McNeil, who had already undergone Tiberium augmentation, unbeknownst to GDI) and other prisoners (including Jake McNeil, Michael's older brother). Solomon led the final attack against the Sarajevo Temple of Nod, where he ordered the GDI Ion Cannon to eradicate the Temple.[4] Not long afterwards, he was presented with a CCTV recording of Kane's final moments, as he embraced the ion beam in the hallway of the Temple; a sight that haunted him ever since. 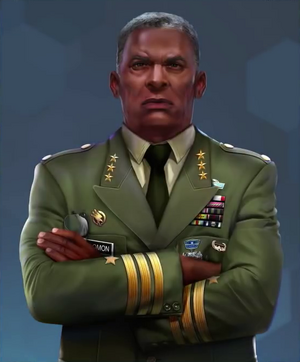 Solomon after the First Tiberium War

The loss of two of his brothers to the Brotherhood of Nod left him with a bitter hatred of Nod and Kane. His bitterness manifested in his eagerness to use the Ion Cannon against Nod forces.[5]

He continued to serve in GDI and eventually became its supreme commander, stationed aboard the GDSS Philadelphia. In order to avoid another war, he installed Nod general Hassan in Cairo, who rallied the fractured Nod forces, feeding them propaganda, but keeping them pacified. When Anton Slavik drew attention to himself as he and the Black Hand actively fought GDI forces, Solomon ordered his immediate capture and execution. When Slavik was freed by Oxanna Kristos and escaped, the distraught Hassan sought help from Solomon, who calmly informed him that if Slavik gains power, the so-called Pharaoh will become useless to GDI, effectively stating that no help will be given.[6]

When the reunited Nod launched a series of attacks against GDI forces worldwide, Solomon was the first to be contacted by Kane, who taunted him for believing he was killed in the Sarajevo Temple. Unnerved, Solomon called upon Michael McNeil to counter Nod. Preferring strategy and careful planning, Solomon stayed in contact with the GDI commander throughout the conflict, often clashing with the young commander, but seeing how McNeil reminded Solomon of himself when he was young[4], he let those problems slide. Solomon was often portrayed as a responsible and strong leader, yet he apparently held mutants in low regard, often referring to them as "shiners" and saying that they "can wait."

When Michael McNeil ordered a hasty attack on Cairo, Solomon was quick to inform the commander that he would not authorize it as such. While was unwilling to risk losing such an able commander to a court martial in case his forces lost, he provided them with a veteran Titan unit deployed from the Philadelphia via orbital insertion.[7]

Solomon's fate after the Second Tiberium War is unknown.

He has also received the Combat Infantry Badge as well as Parachutist Badge among several others.

James Solomon appears in Tiberian Sun. His name is also briefly mentioned in the background of the Renegade intro and the Command & Conquer Bible confirms his status as the player character of GDI in Tiberian Dawn.

Solomon is a selectable commander in Command & Conquer: Rivals. He has access to the Ion Cannon.[5]