Get the Rods Back

Get The Rods Back is one of the route for the fourth mission in the GDI campaign of Command & Conquer.

With Sheppard away at the United Nations, M.O. Morelli gave a recon report to James Solomon who had been left in charge. Within the Belarus border, a convoy carrying a supply of activated pellet rods stolen from Germany had been spotted by GDI forces. At the same time another convoy was about to set out from Gdansk Poland.

These rods are part of the necessary materials to build a nuclear device, so to prevent Nod from obtaining one of these devices, the GDI had to get the rods back. Two small GDI forces set out to steal the rods from the Nod bases at Gdansk and Bobyrusk.

The forces available to the commanders in these mission were limited. As a result they would have to have resorted to speed and stealth rather than all allout assault in order to regain the rods.

GDI forces successfully entered the Nod bases and stole back both groups of pellet rods.

While the rods were being regained GDI forces advanced into Belarus and Poland. Their loss set back Nod plans to assemble a nuclear weapon. However in the end this did not matter as Nod would manage to acquire three fully functional nuclear weapons in their African campaign. 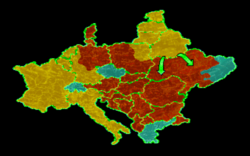 The GDI overruns Belarus and moves into Ukraine.

James Solomon's forces overran Belarus while their commander was leading the mission to regain the rods.  With the help of GDI airpower from Estonia under M.O. Morelli, Nod forces were swiftly driven out of Belarus much as they had already been driven out of Latvia, Lithuania and Lithuania.

Other forces sent by Mark Jamison Sheppard before his departure into Poland were successful in capturing control of north-eastern Poland.  But in the process some of them became indicted rightly or otherwise of the Bialystok scandal.

Nod forces continued to advance into Germany, while Bulgaria and Romania fell completely into Nod hands. Ukraine's defenders however held out desperately for the coming GDI reinforcements.... 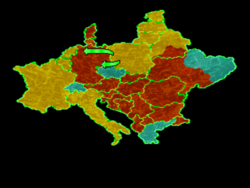 Having overrun Poland GDI forced were able to move in to reconquer Germany.

With the majority of the Polish Nod forces invading Germany, James Solomon's forces swiftly overran Poland, while their commander was engaged in leading the mission to retrieve the rods from the base in Gdansk.

Some of these forces however were accused rightly or otherwise of the Bialystok massacre.

Nod forces however did not find the fall of Poland quite as devastating as James Solomon had imagined.  The sudden defection of neutral Austria to the Nod cause led to German GDI forces once again being outmaneuvered.  Advancing from Austria, Denmark and occupied Germany at the same time Nod successfully established control over all of Germany.

It was now up to James Solomon to liberate them from Nod rule.....