The extremely powerful Giant Ants are the main antagonists of the secret campaign It Came From Red Alert! in Counterstrike.

File:RA1 Carville briefing giant ants
The video briefing of the infamous Giant Ant missions in Red Alert, with General Carville, who did all Allied briefings in Red alert: Retaliation.

The Giant Ants encountered by Allied and Soviet forces during the Ant Missions were a result of radiation poisoning which caused regular-sized ants to grow into an enormous size. It was hypothosised that the cause was perhaps an old and damaged nuclear reactor plant. Though traditional science would suggest that such creatures couldn't exist due to an inefficient respiratory system characteristic of insects, the simple fact that they exist proves otherwise. The exoskeletons of the Ants were extremely strong and for its size, lightweight. The Giant Ants had several underground nests, which were all connected to an abandoned Soviet facility - their main nest and main spawning ground for the Ant Queen.

There were two areas during the Ant Missions where the Giant Ants were known to have nests. One was at a deserted Soviet research facility, whose personnel had been slaughtered by the ants following their inception. The other location consisted of a peaceful village by the sea which was subsequently evacuated following the threat of the Giant Ants. If there are any surviving Giant Ant nests, Allied and Soviet forces were not privy to their location.

The campaign against the Giant Ants was led by the combined effort of Allied and Soviet forces (which interestingly forshadow the union of Allied and Soviet technology and the yellow colour schemes adapted by the Global Defense Initiative later on). It was reported to have been one of the most gruelling of war time campaigns with a considerable body count from both Allied, Soviet and Giant Ant forces.

The Giant Ants were first encountered following a garbled distress call from an Allied outpost before they lost contact. Prior to reinforcements arriving, the outpost had been severely crippled by Giant Ant forces with only a handful of foot soldiers and a damaged Ore Truck surviving the initial attack. It didn't take long before Allied forces had been attacked by Giant Ant forces and the base, once again, coming under attack. Allied forces were able to hold out against the Giant Ant forces until further reinforcements arrived.

Following the arrival of Allied reinforcements, a special task force commander was assigned to evacuate any civilians within the area and to destroy any bridges that bridged the gap between Giant Ant nests and the rest of the countryside. Bottled up on the island without aerial or naval capabilities, the Giant Ants were destroyed under a combined aerial bombardment. 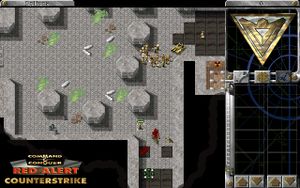 Abandoned Soviet base hijacked by the Giant Ants

Scout Ants were used quite prodominantly during the Giant Ant missions as worker drones and scouts, often

locating nearby human settlements and relentlessly attacking them often wiping out all enemy forces. The Scout Ant often used its mandible to attack human forces, killing infantry in less than a second but often had great difficulty destroying metal vehicles and concrete structures. Furthermore, its increased speed and enhanced mobility was due to the sacrifice of a thinner carapace and could easily be killed by gunfire.

The main soldier of the ants, the Warrior Ant was slower than the Scout ant, but its stronger mandibles meant that it was much more powerful against vehicles and to a lesser extent, structures. It retained the ability to kill an infantry unit in one hit, as well, but its main strength was durability: it had much higher resistance against enemy fire than the scout ants, although it was still vulnerable to both machine guns and heavy enemy armament. However, like all of the other ants, these would come in overwhelming hordes that would make short work of mostly any resistance fielded against them.

Fire Ants launched great gouts of fire similar to the flame blast launched by the Flame Tower, due to poorly understood chemical reactions within the ant. The flame ant was more mobile and more durable than human Flamethrower infantry. It was murderously effective against infantry, light vehicles, and even structures, but heavy firepower provided by tanks could easily crush fire ants.

These creatures were the source behind the ant army. Most of them didn't fight, but were still important to the ants due to their ability to produce additional ant warriors.

Larvae are ants that have recently hatched. In time, under the care of the workers these would mature into a new generation of Giant Ants (or potentially, young males and queens that could take flight and start new colonies elsewhere). Their destruction was paramount, and Allied forces destroyed them alongside their mother.

The Queen Ant was the mother of all of the ants, it was critical that she be taken out. Although capable of generating enormous currents, and possessing a very thick hide, she was immobile, which made things easier for the anti-ant forces. Eventually, she, like the rest of her ants, was silenced.

According to later tabloid reports, the forces used against the Giant Ants, though under the direct control of the Allies, utilized a wide range of weaponry, including confiscated Mammoth tank alongside the M1 Abrams. This blend of units roughly matched that of the Global Defense Initiative. This has led certain conspiracy theorists to suggest that the extermination force, allegedly lead by Generals Nikos Stavros and George Carville, was the Operations Group Echo, the black ops predecessor to GDI. This would mean that the official denial of the Ants existence may actually be to cover up Echo's existence, rather than to conceal that of the Ants.