As the Empire of the Rising Sun's ambitious plans of dominating the Western hemisphere started to crumble, the nation's leading weapons manufacturers scrambled to come up with contingency plans that would appeal to their shareholders. Thus did the imminent defeat of the Empire directly bring about the merger of two of the top Imperial corporations, Tenzai Robotics and Shirada Shipworks (now reformed under the banner of Ten-Shi Zaibatsu). Desperate times caused these former competitors to set aside their differences and execute a long-dormant proposal made possible only by a harmonious union and their respective expertise. The result is a machine that even the Empire of the Rising Sun's best scientific and military minds previously thought impossible. No, the Giga-Fortress cannot bring back to life the Empire of the Rising Sun's late Emperor Yoshiro. However, this semi-sentient computer-controlled weapons platform is programmed to exact terrible revenge on the Empire's now-numerous enemies - even if the day comes when no Imperial men or women are left to continue the fight.

The idea of a weapon that can continue fighting self-reliantly even without human operators is suggestive of the depths of desperation the Empire's fiercest loyalists fell to. Nevertheless, the Giga-Fortress apparently is real, judging by a growing number of independently-verified accounts coming from Imperial defectors, Soviet prisoners of war, and Allied servicemen. Assuming these accounts can be taken at face value, the Giga-Fortress must be far and away the most expensive and largest fighting craft ever developed by the Empire of the Rising Sun (or any nation, for that matter). Even an Allied Aircraft Carrier or a Soviet Kirov Airship would be dwarfed by the sheer size of this thing, yet almost none of the innards of the Giga-Fortress are crew-quarters. Instead, the Giga-Fortress is said to be lined with an untold number of servers, communications arrays, and self-diagnostic systems, many of which are purposely redundant. A bridge, adjacent bunks, and mess hall were the only quarters built for a human crew, and even these amenities were mostly for formality's sake. No expense was spared in the production of this craft. Instead the Giga-Fortress must have been built under the nihilistic assumption that no crew would be available to steer the thing along its deadly course. 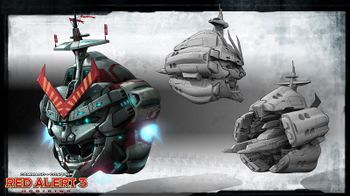 The Giga Fortress is any ground unit's worst nightmare.

Originally thought to be two completely separate platforms, the Giga-Fortress is now believed to be a single entity capable of assuming two completely different forms: a massive sea-fortress, bristling with more than half a dozen heavy-duty cannons and multiple independently-tracking missile systems; and a sky-fortress, built to resemble a monstrous face, armed with a devistating arsenal called the "God's Breath device" located in the "mouth" of the Giga Fortress. The shotgun wedding of Tenzai Robotics and Shirada Shipworks made all this possible, in what may one day considered be among the most outlandish acts of the post-war Empire. As well, it may be remembered as the pinnacle of military robotics. Shirada's advanced weapons, composite armor, and floating fortress nautical locomotors were seamlessly merged with Tenzai's most sophisticated artificial intelligence (A.I.) and dual-stage variable form systems in the construction of this weapon. Those directly responsible are anonymous, likely deceased; some Allied officials have even speculated that the computer-driven Giga-Fortress is the cynical by-product of war criminals refusing accountability for their actions.

Thankfully, as yet there are no publicly documented incidents of a Giga-Fortress attack, and this may be why the machine has no known weaknesses. It is believed to have no moral inhibitions, either, at least not by those who accept that the Giga-Fortress is self-aware to whatever extent is possible for a computer-controlled machine. Its "personality", according to this camp, has been programmed with a version of Imperial military doctrine that places the success of the mission, the ultimate victory of the Empire, and the total defeat of its enemies as top priorities, in that order. But unlike a zealous Imperial warrior, the Giga-Fortress A.I. has no concept of morale, no ability to second-guess officers or to misinterpret its directives, and no need for rest. It exists, perhaps, in a childlike or even a primal state only to fight until either it ceases to operate or the millions of individuals it "thinks" are enemies have been eliminated. One can only hope that the Allies quickly disarm however many of these things finished production.

The Giga-Fortress was deployed by Tatsu in an attempt to destroy the Allies occupying Japan, and one was operational near his headquarters, with others being constructed soon thereafter. They were all destroyed, however.

In the Imperial campaign, 3 Giga-Fortresses were sent from Tatsu into the battlefield to aid the commander to destroy Vladivostok against the bases of Oleg Vodnik and Nikolai Moskvin, as may well as to eliminate Giles' Allied base.

Giga Fortress in its water configuration.

Battlefield reconnaissance has revealed at least these facts about the Giga-Fortress:

• Variable transformation -- Much like several of the Empire of the Rising Sun's much smaller pilot-assisted robots, the Giga-Fortress has two completely different forms. As the sea-fortress, it is capable of defeating entire enemy armadas, shelling coastlines, or assaulting flight groups. As the sky-fortress, it can supposedly devastate anything on the ground with some sort of a powerful weapon called the God's Breath Device. Anything underneath the sky fortress would be crushed, were the sky fortress to revert back to its naval form overhead.

• Truly massive -- The Giga-Fortress dwarfs all other modern combat vehicles, including the biggest naval vessels in the Allied or Soviet armadas. Therefore it is thought to be slow and almost impervious. The thousands of redundant systems inside the vessel are said to be constantly maintaining and repairing themselves.

• Cost-prohibitive -- Nearly-limitless research budgets spiraled deep into the red during the development of the Giga-Fortress. According to resource estimates, there is almost no way that more than a handful of these behemoths could have been constructed. 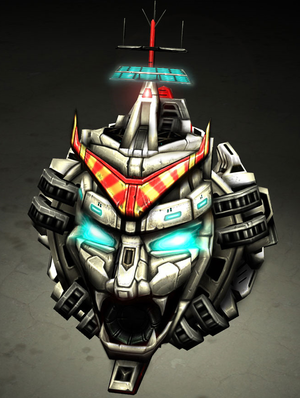 The Giga Fortress is extremely powerful and durable in both modes. In its Sea Fortress mode, it serves a role similar to tier three heavy bombardment ships. Unlike said ships, however, its VX missiles allow it to defend itself against enemy aircraft, as well as enemy vessels that managed to close in.

In its Sky Fortress mode, its attacks inflict far more damage, and it hits targets in a line, allowing it to hit many units and structures that are clustered together. Its God's Breath device greatly out-ranges any anti-air defenses, allowing it to destroy them from afar. However, this is also its more vulnerable mode, since the God's Breath device is its only weapon in this mode, rendering it completely defenseless against air superiority fighters. Its slow movement and turning speed in this mode is also a deadly weakness, since it can be easily swarmed by anti-air infantry and vehicles, which can safely attack it from behind or below it. This is especially dangerous if there is no nearby water, which prevents it from transforming into Sea Fortress mode.

Due to their massive cost, losing even a single Giga Fortress is a major setback, so they must always be escorted by other units. In addition, despite being the most expensive unit in the entire game, the Giga-Fortress Core is just as fragile as any other Nanocores, so they should be unfurled as soon as possible, since enemies could easily destroy them while they are still in Nanocore form.