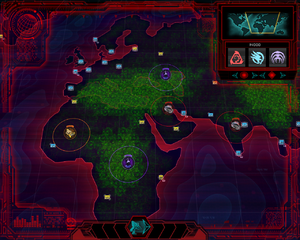 Strategic view in Global Conquest mode, when playing as Nod

Global Conquest mode is a turn-based strategy game mode integrated into the PC version of Command & Conquer 3: Kane's Wrath. The Xbox 360 version (including the Xbox One port) does not have this game mode, and is replaced by Kane's Challenge instead.

The goal of the game is to achieve world domination. The player must choose one of the three factions which will be used to attain this goal. World domination is achieved by either destroying all bases owned by the other two factions, or by achieving a faction-specific goal. These alternative win conditions are as follows:

At the start of the game, each faction has four bases randomly placed across the globe. Bases provide a place for the player to assemble their armies, called strike forces and can grant them additional support powers, once they've been built up. Strike forces are integral to the Global Conquest play mode. Each force is a defined group of units that the player deploys from bases to the global map in order to attack enemy bases, engage hostile strike forces, or establish new bases.

All bases begin at tier 1, but can be upgraded to increase the base tier. This expands its area of influence and allows it to produce strike forces with a higher tier requirement. In addition, the player may upgrade the base's power and defenses. These secondary upgrades will automatically improve as the base's tier increases.

Once a base reaches tier 3, it may construct one of several utility structures that provide global support powers or allow assembly of epic strike forces from that base. These include each faction's superweapons and epic unit factory from the normal game mode, but there are additional structures unique to the Global Conquest play mode, as well.

Should a base be damaged, whether by a strike force or support power, it can be repaired, restoring all structures. Only one task may be done each round by any given base; one upgrade, repair, utility structure addition or strike force deployment.

Strike forces are the hands of the player, in a sense, being the primary means of influencing the wider world. The player can use default strike forces, or define a custom force to fit his or her unique play style, but once assembled, the force' composition cannot be changed. A strike force may be composed of units from any single subfaction and only those containing an MCV may be used to establish a new base.

Once assembled, a strike force can be issued commands to move across the map and attack. They will move a certain distance each turn, so that longer moves can take several turn to complete. Each faction has additional ways of moving their forces around. GDI and NOD forces can make use of seaports, traveling from any two ports as their move for that turn, while Scrin forces may gain access to a support power that creates a temporary wormhole between two locations on the map. These wormholes can be used by Scrin forces in the same manner as ports are used by human forces. All factions can airlift their strike forces between tier 2 & 3 bases.

When strike forces engage in battle, the player may choose to play the scenario on the familiar C&C 3 battlefield or allow the computer to automatically determine the outcome of the fight. The latter choice is effortless, but often results in an unfavourable outcome for smaller, specialized forces. If the strike force survives, any units lost in the scenario are subtracted from the force on the world map. These units may be restored by bringing the strike force under the influence of a base and repairing it. Surviving units will retain their veterancy, allowing successful strike forces to become quite powerful over time.

Scattered across the globe are a number of cities that serve as resource nodes, of sorts. In addition to being key to Nod's alternate victory condition, each faction receives income, at the start of its turn, for every city under the influence of one of its bases. Cities have two basic attributes: population and unrest, and every faction has a different effect on the cities under its influence.

Both GDI and Nod promote an increase in population, as they have a vested interest in the survival of the human race - but while the former decreases unrest in an attempt to keep the peace, the latter increases it, driving the people toward rebellion. The Scrin faction, on the other hand, decreases population, seemingly converting unfortunate victims into resources, but having no effect on unrest.

Unrest is indicated by the colour of a city's icon and shows the extent of the political allegiances of the city's authorities to GDI or Nod. Blue cities are fully GDI aligned cities with minimal unrest. As unrest develops, their colour shifts to light blue, yellow, orange, and finally red, the state of full unrest (and full Nod alignment). If a city remains under Scrin influence for long enough that it's population is completely wiped out the city is shown as grey and has no unrest value, however placing a GDI or Nod base near a greyed-out city will restore its population.

Population is indicated by the number and thickness of the bars on the edge of the square coloured city marker.  The larger the city is the more valuable it is to all factions, even though the Scrin faction slowly wipes out the population of the all cities under their influence and converts them into extra resources.