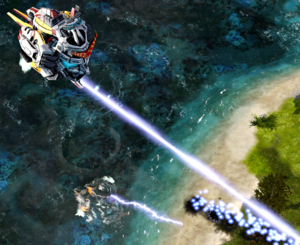 The God's Breath device is a devastating weapon used only by the Empire of the Rising Sun's fearsome Giga Fortresses.

It is an energy cannon mounted within the "mouth" of the Giga Fortress, only usable when the Fortress is in its aerial configuration. When fired, the God's Breath device launches a devastating energy beam, capable of demolishing anything in its path, units and structures alike.

Despite its power, the weapon has a relatively slow rate of fire, and can only attack ground units. Furthermore, aiming the weapon requires the entire Giga Fortress to turn, and it cannot hit units that are too close to the Fortress itself, making the Giga Fortress extremely vulnerable to nimble anti-air units, such as Javelin soldiers and Flak troopers.