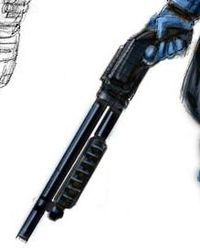 The Grummond-8 shotgun is a Belgian made pump shotgun issued to Allied Peacekeepers. The decision to issue Peacekeepers to areas of close, urban combat, in order to fight Russia's advances into many urban areas, led to arming them with these powerful weapons. If used at close range, it can knock back infantry, even powerful units like Tesla Troopers, Yuriko and Natasha. Being a shotgun, no sophisticated training is required. It is easily maintained, rugged, all weather weapon. The shotgun however is not designed fro amphibious operation as its shell would be defective when submerged, banning it from underwater deployment.

It is an effective weapon when it comes to fighting infantry and some light vehicles, but against heavier units, it is next to useless. Although it is a shotgun, no splash damage is seen so far. The shell is provenly more potent than a burst of Soviet ADK 45 or Imperial kinetic rifle.

It is somewhat odd that the Peacekeepers would be armed with a weapon as close range as a shotgun but still manage to hit far away targets. It is assumed that the shotguns sported by the soldiers are loaded with solid slugs(similar to the suppressed shotgun from the Splinter Cell franchise) rather than ordinary shells which would scatter and barely hit targets from a distance, or they may be using Full chokes to increase range. However this is also odd, considering that Riot Shotguns generally use short range chokes.

It is unknown why the Peacekeepers would sport something as unorthodox as a close range shotgun when all of the basic infantry in the past Red Alert games are equipped with assault rifles. In addition, using a shotguns as a primary weapon in field combat is practically suicide since a shotgun's effective range is only 40 yards while rifles have effective ranges up to, and some times over 100 yards. Still, this may be relative, as the Peacekeeper's shotgun is effective from far away, but be able to kill just about any infantry at "point-blank" range.

One possible explanation for equipping Peacekeepers with shotguns is that they are meant to engage the enemy in the urban environments of Western Europe, where close-quarters warfare rules the day. In Vietnam, it was confirmed that most US soldiers didn't engage an enemy until they were around 100-300m away, and the same may hold true of the Allies in urban environments. They can also be using military shotguns, many of which are modified to narrow the spread to increase range. Another explanation may be the implementation of a possible incendiary or explosive buckshot, hence making up by yards in raw firepower what is lost in long range.

Other theory is the usage of larger (presumably 10 gauge) standard. Several variant of shotgun (for competition and hunting) may achieve range and peformance usually achieved by rifle. Shotgun may be double barelled to double the stopping power.