The MBT-X8 Guardian Tank is the Allied main battle tank in Red Alert 3 and its expansion, Uprising. 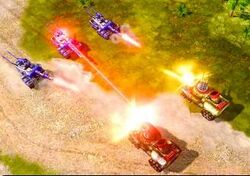 A main battle tank of British origin, the Guardian became the mainstay of Allied forces on the ground worldwide after besting the Grizzly, an American-made design, in field tests across the board.

The Guardian boasted an impressive balance of power, durability, and maneuverability and had a molded frame that helped keep production costs down. Its 90 mm main gun could punch through Soviet armor reliably and packed more firepower, though a slightly lower rate of fire, than the Guardian's Soviet counterpart.

In addition, each Guardian tank was equipped with a target-designating module, which replaced the exposed machine gun mount found on older models. Designed to complement other Allied weapons platforms, the Spyglass target designator (colloquially called the "target painter") relays targeting information to nearby Allied forces. By automatically interfacing with their weapons systems, the target painter could make other forces more accurate and deadly by compensating for wind direction, visibility, and more than 100 marginal factors--all of which add up.

A Guardian tank was unable to maintain the beam through the recoil of its main gun's firing sequence, so Guardian crews must coordinate well to decide which unit within the column is going to "cast the lure" (as Guardian technicians put it) while the others press the attack.

The Guardian tank is slightly cheaper than the Hammer tank and the Tsunami tank. In terms of overall abilities, it is well balanced, having the fastest speed and the strongest firepower of all three MBTs (not counting Hammer tank's leeched weapons), while also being the second most durable. Like all other tanks, it is vulnerable against aircraft and anti-armor infantry, and need to be protected from them by other units.

Its target painter is an extremely valuable support weapon. Painted targets take 50% more damage from all weapons, or 100% more with the High technology upgrade. Since the target painter has a much longer range than the main cannon, it is a good idea to always have one Guardian tank switched to target painter at the back, while other Guardians engage the target. The effects of multiple target painters do not stack.