Faced with Soviet incursions on multiple fronts, Allied nations hurriedly banded together to form a military coalition from the toughest or surviving bits and pieces of representative nations' defense forces. Although the need to form a cohesive military network of course was urgent, certain key elements needed considerable time to be flushed out. After all, despite widespread differences of opinion within the Allied ranks regarding how best to repel the Soviet Union's advancements, everyone was on the same page about at least one thing: The Allies wouldn't get a second chance to keep their nations' sovereignty. So it was with great care (and some trepidation) that Allied War Council made the decision to move forward with plans to double down on production of the MBT-X8 Guardian Tank, mainstay of the Allies' armor divisions, and a crucial component in the free nations' ongoing struggles to keep the U.S.S.R. from expanding its borders any further. 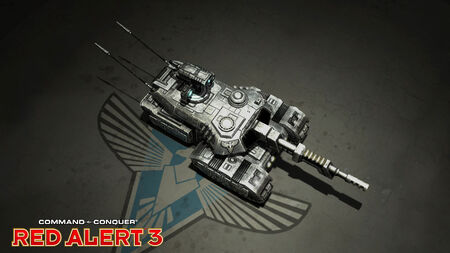 The Allies have proven themselves capable of repelling Soviet ground forces in recent years thanks in part to the Guardian Tank, one of the toughest workhorses of the Allied military.

A main battle tank of British origin, the Guardian became the mainstay of Allied forces on the ground worldwide after besting the Grizzly, an American-made design, in field tests across the board. While the Guardian's performance characteristics admittedly did not exceed those of the Grizzly by a wide margin, even a narrow victory was enough to justify switching production lines over to this newer model. After all, the Allied War Council fully expected to have to deploy Guardians in bulk in order to stave off Soviet armor divisions, believed to be the strongest in the world. To that end, the Allied Guardian Tank has proven to be something of an underdog, effectively helping to repel larger Soviet forces while bolstering the combat-effectiveness (if not the morale) of coalition forces caught in the same struggle.

The Guardian boasts an impressive balance of power, durability, and maneuverability and has a molded frame that helps keep production costs down. Its 90 mm main gun can punch through Soviet armor reliably and packs more firepower, though a slightly lower rate of fire, than the Guardian's Soviet counterpart. However, the Guardian's Soviet counterpart was not the Allies' greatest concern, for they needed to be able to contend with an assortment of heavy vehicles. To this end, a relatively heavy platform like the Guardian Tank proved to be a suitable home for a special targeting device that could be used to even the odds against the worst that the Soviets had to offer. Each Guardian Tank now comes standard with a target-designating module, which replaces the exposed machinegun mount found on older models. Designed to complement other Allied weapons platforms, the Spyglass target designator (colloquially called the "target painter") relays targeting information to nearby Allied forces. By automatically interfacing with their weapons systems, the target painter makes other forces more accurate and deadly by compensating for wind direction, visibility, and more than 100 marginal factors--all of which add up. A Guardian Tank is unable to maintain the beam through the recoil of its main gun's firing sequence, so Guardian crews must coordinate well to decide which unit within the column is going to "cast the lure" (as Guardian technicians put it) while the others press the attack.

Casualty rates among Guardian Tank crews are being kept close to the vest by Allied officials, though one might assume the worst given that these forces, well-equipped though they may be, were necessarily used to turn the tide of many losing battles. Now that the Allied forces have eked out a few victories along some European borders, some of the concern is turning to hope, even a bit of bravado on the part of some Guardian Tank crews, who quip that their vehicles ought to have been named differently now that they're occasionally taking the offensive. At any rate, in spite of the inherent dangers, many career military men strive for the honor of serving aboard such a vehicle in the name of the Allies' difficult mission to stabilize the most dangerous countries of the world.

Battlefield reconnaissance has revealed at least these facts about the guardian tank: