Hail to the Chief

Operation: Hail to the Chief is the third mission of the Allied campaign in Command & Conquer: Red Alert 2.[1]

Although the Soviets had suffered a number of setbacks in their initial invasion of the United States, their momentum continued largely undeterred. While they lost ground in Colorado Springs, they struck yet another major blow against the U.S. government. During their invasion of the U.S. East Coast, the Soviets managed assert their full control over the capital through psychic control. 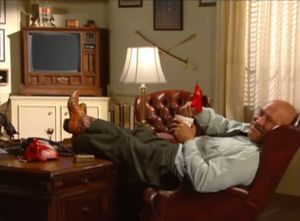 In an attempt to win the war without any further resistance, Yuri and his Psychic Corps deployed a Psychic Beacon in front of the White House, placing the President, his cabinet, and all surviving military staff under firm mind control. The President declared that the American people pledge allegiance to Premier Romanov and General Ben Carville informed the Commander (who had not been brainwashed) that the war was over.

As the Commander made it to the rendezvous point with the unaffected Allied garrison at the Jefferson Memorial, Lt. Eva introduced the IFV to the commander. As the garrison prepared its defenses, one engineer repaired the memorial, giving the commander extra resources. Not long after, waves of civilians under Soviet mind-control made their way to the Allied base, where they were reluctantly mowed down. Tesla troopers were also detected in the city, prompting Lt. Eva to brief the commander about their capabilities.

If done quickly enough, two IFVs loaded with engineers can be rushed to a nearby Soviet production center. After capturing the position can be defended by loads of Pillboxes, providing more room, resource and access to the enemy production center. The nearby hospital can also be captured. To clear a building from enemy garrison, Rocketeers can be a good alternative, provided Flak tracks are not around.

Not wanting the Soviets to discover America's military tactics and secrets from the mind-controlled President Dugan and General Carville, the commander resorted to air power for a quick victory. The Rocketeers were supported by the Harrier squadrons and made hit-and-run air assaults on the two Soviet bases. They made short work of the Soviet base across the river but soon ran into Soviet flak weaponry at the Washington Monument, prompting the need for a ground assault.

While this was happening two Allied squads of scattered units appeared in the city. Before heading to the Allied base to regroup, the commander sent them to repair the Lincoln Memorial and Smithsonian Castle. Assisted by the Rocketeers, they eliminated the guards and repaired the monuments, granting more resources for the commander to build up an armoured division of Grizzly tanks and IFVs against the second Soviet base.

The armoured division soon swarmed into the Soviet base by detonating nearby ammo dumps that caused catastrophic damage to the nearby war factory, assisted by the Harrier squadrons, and quickly overwhelmed the Soviets, destroying all of their production facilities. They soon located the Psychic Beacon in front of the White House. Without hesitation the Allies destroyed it to prevent any more civilian casualties, large though they already were. President Dugan, now free from mind control, thanked the commander before he and his Secret Service agents were evacuated from Washington, D.C. via a Nighthawk Transport helicopter, though the transmission shows the Nighthawk as the Presidential helicopter, Marine One.

Most of the assets can accessed when after you destroy the Soviet defenses and sent in an engineer.

After President Dugan was evacuated, the remains of the American government fled to Canada, where they set up a government-in-exile. Meanwhile, the Soviets captured the whole of the city. The Allied Washington garrison retreated across the Potomac river to reinforce the Pentagon, still under Allied control. With Washington under Soviet control, the Allied hold on the U.S. was severely weakened. If the mission is completed fast enough, most of America's classified information is saved from the Soviets.

Briefing
President Dugan thanking the commander for the rescue