The Hammer tank is the main battle tank of the Soviet Union in Red Alert 3 and its expansion, Uprising.

The Hammer's heavy armor plating protects its crew from all but the heaviest concussive impacts, and its standard 85 mm autoloading cannon is a proven anti-vehicle weapon, offering excellent rates of fire and lower chances of ammunition accidents. A complex recoil management system, based on the stabilization system used to keep Sickles and Terror Drones upright, redirects the gun's kick and keeps the gunner on target through multiple shots.

The reason for its unusual turret configuration was its TS1 "Tsarsky" Leech-Beam, a weapon accidentally invented by Soviet scientists while they were researching the Apocalypse tank's Magnetic Harpoon. By concentrating the tractor beam and increasing the frequency, the device can literally rip metal objects apart. This allows the Hammer to repair itself during battle by melding vehicular debris to weak sections of its armor.

Another benefit was that the Hammer tank can steal the weapon of an enemy vehicle by increasing frequency at the time of its destruction, with little to no damage to the weapon itself. Using advancements in Soviet mass production capabilities, Soviet engineers devised a multifunctional weapon interface mounted on the left side of the turret, allowing nearly any weapon to be re-attached. This gave the Hammer a versatility unlike almost any other weapon in the Soviet arsenal.

Soviet officials did no comment on accusations that some Hammer crews have increasingly shown thuglike, callous behavior in the field.

The Hammer Tank deals somewhat less damage and is slower than the Guardian tank, its Allied equivalent, but makes up for this with better armour, a somewhat higher rate of fire and much greater versatility thanks to the Leech Beam, which can grant it anti-aircraft or anti-infantry capabilities; something the Guardian lacks. Of course, such capabilities come with some cost and the Hammer is a little more expensive than the Guardian.

Hammer tanks will defeat the vastly inferior tsunami tank and the somewhat inferior guardian tanks one on one and win.

The TS-1 Tsarsky Leech-Beam is the Hammer Tank's secondary attack. It uses a magnetic beam to steal armor and weapons off enemy tanks, allowing the tank to effectively repair itself and gain a secondary weapon. This gives the Hammer a unique versatility that no other unit has. In addition, the range of the Leech-Beam is considerable, longer than the 85mm cannon itself. The Leech-Beam can also steal armor from buildings but does not have any effect on infantry.

Note that a Hammer Tank that is leeching an enemy vehicle does not have to destroy the vehicle itself in order to gain its secondary weapon, it just has to have the Leech Beam locked on the target when it is destroyed. This is useful when leeching tougher enemies such as Assault Destroyers, Apocalypse Tanks, King Onis, etc., which Hammer Tanks are largely ineffective against. For example, a commander can start leeching an Assault Destroyer and then finish it off quickly with Twinblades or something powerful. Once the tank has leeched a weapon it becomes a permanent feature that cannot be swapped so choose your targets wisely. 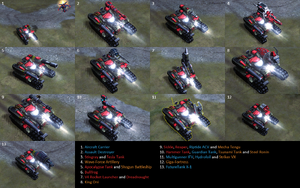