In a lonely corner of the sprawling Arkhangelsk Tank Plant sits Building 19, a large gray monolith whose only notable feature is a pair of oversized hangar-style doors emblazoned with the building's number. Perhaps it is fitting that the backbone of the Soviet armored corps, the so-called Hammer main battle tank, would be built in such an austere setting. The Hammer Tank is truly a utilitarian weapon built to adapt well to unpredictable battlefield conditions. And to the Soviet military and the nation's people, it is not a weapon at all, but a tool, as its name suggests.

The Hammer's outward appearance is unmistakably Soviet. The blocky hard-angled chassis, the aggressive exposed treads, and the bulky cockpit are reminiscent of earlier Soviet battle tanks. However, the offset cannon and the unusual-looking protuberance in the front of the vehicle do set it apart from earlier models. The Hammer's heavy armor plating protects its crew from all but the heaviest concussive impacts. At the same time, its standard 85 mm autoloading cannon is a proven anti-vehicle weapon, offering excellent rates of fire and lower chances of ammunition accidents. One might expect the turret to spin wildly each time the cannon fires, but a complex recoil-management-and-stabilization system redirects the kick of the gun and keeps the gunner on target through multiple shots. Surprisingly, this technology was "off-the-shelf", being based heavily on the stabilization system used to keep Sickles and Terror Drones upright, modified to handle the explosive force of firing the cannon. Had a solution not been readily available, however, the design team would have created one from scratch, because the offset of the cannon was a critical part of the Hammer tank's most astounding innovation. 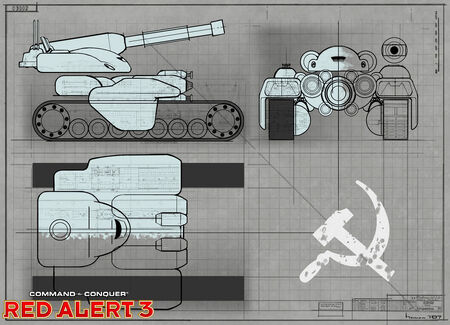 Symbol of the Soviet War Machine, the Hammer Tank is one of the most self-sufficient and ruggedly built components of the Union's vast military arsenal.

Like many discoveries throughout the annals of scientific history, the invention of the TS1 "Tsarsky" Leech-Beam was purely accidental. Arkhangelsk scientists researching magnetic harpoon technology for the Apocalypse project were surprised to find that concentrating the tractor beam and increasing the frequency allowed the device to literally rip metal objects apart (a discovery which nearly caused the collapse of Building 19). The resulting weapon granted two significant boons to the already-impressive Hammer. First, by re-calibrating the magnetic field, segments of shorn vehicular debris could be melded to weak sections of the Hammer's armor, effectively regenerating hull strength in the midst of a battle while the beam was active. Second, by increasing the amplitude at the time of the vehicle's destruction, entire weapons could be incised from the enemy with little to no damage to the weapon itself. Using advancements in Soviet mass production capabilities, Soviet engineers devised a multifunctional weapon interface mounted on the left side of the turret, allowing nearly any weapon to be re-attached. Given its ability to simply steal the armaments of nearly any armed vehicle while patching up any damage sustained in battle, the sheer versatility of the Hammer eclipses that of nearly any other unit in the Soviet arsenal. 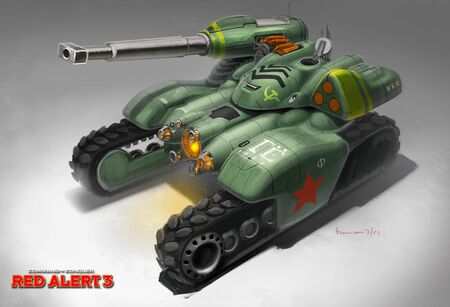 The Hammer's remarkable Leech-Beam functionally allows it to remain battle-worthy through prolonged engagements and get its crew back in one piece.

Even with such an advanced weapon system, the Hammer Tank's image is not nearly as glamorized as that of other Soviet weapon systems, such as its larger sibling the Apocalypse. Regardless, the workers in Building 19 take great pride in their creations. They must realize that the Hammer Tank represents the core of Soviet military strength, and their calm determination and commitment shows in the final product, for which every Hammer crew is thankful. So say the official sources, which have made no comments on accusations that some Hammer crews have increasingly shown thuglike, callous behavior in the field, perhaps as a result of wielding such a powerful device on the frontlines of their Motherland's many battlefields.

Battlefield reconnaissance has revealed at least these facts about the Hammer Tank: