One popular theory about how the Allies achieved victory in the war says nothing of the Proton Collider, or the Chronosphere, or any of the Allies' high-tech advantages unveiled later on in the conflict. No, the theory goes that the Allies' fearless air squadrons are largely responsible. Once they asserted a decisive hold over contested airspaces, their enemies were cut off and divided, and the Allies could paradrop reinforcements and supplies wherever necessary. From that point, victory was only a matter of time. Furthermore, pilots of Vindicator-class sortie bombers racked up the single highest confirmed-kill ratio of any single division of the Allied military. Thus, by the end of the war, the quality of the Allies' air power was not a subject of much dispute. Even still, FutureTech Corporation quietly continued working on an aircraft model that promised to usher in a new era of air support. That aircraft is, of course, the FTAC-X2, better known as the Harbinger gunship. Dwarfing even the Allies' own Century heavy bomber, the Harbinger's advanced sensors and weapon systems allow it to hold and secure large areas, as well as to provide heavy fire support to any surface forces in the vicinity. 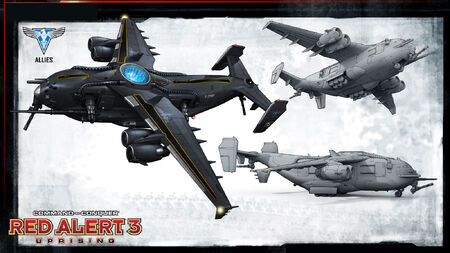 Far and away the largest and mightiest aircraft flying Allied colors, the Harbinger Gunship still packs more power per square inch than just about any other Allied vehicle.

The Harbinger is a veritable flying fortress, and is armed to the teeth with nothing less than the power of the Allies' ultimate weapon, the Proton Collider. Although the technology used in the Proton Collider remains a well-kept secret, the Allied top brass (as directed by European Union President Rupert Thornley himself) agreed to disclose that particular secret to FutureTech Corporation in exchange for services tendered, and in order to fulfill the ambitions of the Harbinger international design team. Before this, the FutureTech team speculatively came up with an aircraft blueprint more massive any known turbofan jet to date, whose ability to fly in fact hinged on the need for an on-board Collider fuel cell -- one that was "small" enough to fit on such a gigantic plane. The story goes, because FutureTech had mostly deduced how the Proton Collider works, Allied brass reluctantly agreed to partner with the corporation in order to complete a prototype of what later became the Harbinger gunship. The production model of the gunship features not one but two starboard-mounted 120 mm Collider Cannons, each one packing the explosive punch of a howitzer of roughly the same size. Because the fuel cell provides the Collider Cannons with their ammunition and also runs the Harbinger's four redundant turbofan engines, the thing can get off the ground and remain airborne for days. 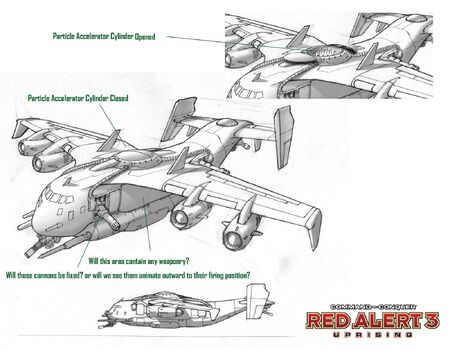 Far and away the largest and mightiest aircraft flying Allied colors, the Harbinger Gunship still packs more power per square inch than just about any other Allied vehicle.

Unlike other aircraft in the Allied arsenal, the Harbinger eschews a VTOL (vertical take-off and landing) design and needs to continually orbit while trained on a target. This, together with the Harbinger's sheer size, also means it is incapable of landing at a standard Allied airbase. Fortunately, the Harbinger features FutureTech's proprietary self-diagnostics-and-repair system, which makes up for its inability to touch down for repairs while out in the field. Meanwhile, an elaborate array of sensors and communication equipment lets Harbinger crews keep a lock on terrestrial targets during flight. Also, to make up for the Collider Cannons' inability to strike precisely at a chosen destination, the Harbinger features a nose-mounted 25 mm chain gun linked to targeting systems that track the gunner's eye movements. These extremely accurate weapons can shred lightly-armored surface threats without causing significant damage to the environs. All of the Harbinger's weaponry is directed toward the ground, however. Enemy air superiority fighter squadrons could conceivably give it a hard time, though the Harbinger's armor has been shown to suffer barely a scratch from a Soviet MiG fighter's Matryoshka missile.

Harbinger gunship crews are hand-picked by FutureTech from its private flight schools, as men demonstrating the coolness under fire and whichever other rare personality traits and skills that FutureTech strictly demands of its teams. Initially, Allied officials were publicly miffed at the idea that their ace airmen might not be qualified to get behind the yoke of a Harbinger, though Pres. Thornley himself quickly smoothed the issue over, yielding to FutureTech on that particular requirement. Both the Allies and FutureTech Corporation have since denied or dismissed rumors of ongoing tensions between Harbinger crews and the Allies' own fighter jocks, even though the latter see the former as "a pack of vultures circling the skies sniffing for blood," according to one Allied pilot who wished to remain anonymous. At any rate, both camps agree that the Harbinger cannot be successful without Allied fighter escort, and that airmen on both sides must routinely and trustingly put their lives into each other's hands even in today's postwar missions.