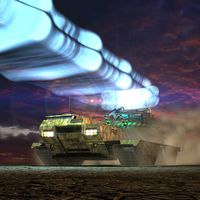 The Disruptor, the first practical application of harmonic resonance technology.

Before the outbreak of the Second Tiberium War, breakthroughs in harmonic resonance were made aboard the Philadelphia, and the GDI's Disruptor vehicle was the first to make use of this technology[1]. The experimental prototype of the Disruptor was unveiled in a highly public ceremony and was planned to be the flagship of the new GDI special forces[2].

During the war, Nod broke through GDI's European perimeter and took over their Hammerfest base, which housed "sonic crystals", key components for the Disruptor. Even though Commander Michael McNeil was able to recapture the base, he was too late to stop Nod from moving the sonic crystals[3]. However, GDI managed to track the crystals' sonic vibrations to a Nod bullet train, and McNeil was able to recover the crystals from Nod, finally allowing GDI to finish the Disruptor[4].

The Disruptor subsequently entered service and proved to be a powerful addition to the GDI arsenal. The destructive power of its harmonic resonance waves was unmatched, as shown when two Disruptors destroyed a Banshee hangar hidden in a mountain[5]. However, the danger of friendly fire was noted, as all units caught in the waves, friend or foe alike, would be destroyed[2].

After the Firestorm Crisis, the Disruptor was phased out of military service. However, GDI engineers found another use for the harmonic resonance technology. They discovered the resonance frequency of Tiberium, and developed sonic resonators capable of breaking down Tiberium crystals[6]. With the threat of Nod gone, GDI switched its focus toward Tiberium abatement[7]. 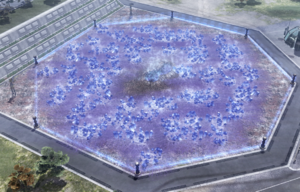 A sonic repulsion field containing Tiberium Vinifera in a Blue Zone city, circa 2047

Blue Zone cities were separated from Yellow Zones by massive anti-Tiberium walls[9]. Sonic emitters and sonic repulsion fields were used to contain Tiberium deposits in Blue Zones, but a mobile platform was required for regaining ground in infested areas. For this reason, GDI developed the Shatterer, a mobile sonic emitter mounted on an all-terrain HoverTech platform, which allowed GDI reclamation efforts to penetrate the vast Tiberium fields covering the planet[10].

GDI's focus on Tiberium reduction eventually yielded results in Germany, where a Blue Zone named New Eden was reclaimed from a Yellow Zone after years of effort[11][12].

Following Nod's unexpected assault on Washington, D.C., the Shatterer was repurposed for military use, and its sonic waves proved exceptionally effective against masses of Nod militants[10]. Presumably, the sonic emitter was repurposed at the same time, as several were seen defending a GDI base in Sarajevo[13]. These new sonic weapons appear to be more sophisticated than their predecessor, as their sonic waves no longer cause friendly fire.

After the arrival of the Scrin and their attack on Munich, it was discovered that sonic emitters were extremely effective against the aliens' ground units, possibly due to their Tiberium-based nature[14]. 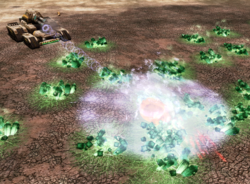 A MARV firing its sonic cannon

Zone Operations Command, a branch of the GDI military that specializes in operating in areas of severe Tiberium infestation, makes extensive use of sonic weapons. Their Zone Raiders and modified Orcas utilized sonic grenade launchers. ZOCOM also has its own more powerful version of the Shatterer called the Zone Shatterer, which can overload its sonic cannon for an extra powerful sonic blast.

The same initiative that created ZOCOM also developed the Mammoth Armored Reclamation Vehicle, a massive anti-Tiberium tank armed with a tri-barreled sonic cannon, which is equally effective against enemies as it is at breaking down massive Tiberium deposits for reclamation[15].

After the Third Tiberium War, Tiberium growth accelerated rapidly due to the liquid Tiberium bomb detonation at Temple Prime, allowing the alien substance to overpower GDI's sonic containment systems[16] and turn nearly 90% of the planet into Red Zones[17].

Even though the construction of the Tiberium Control Network has made sonic abatement technology mostly obsolete, sonic emitters are still used to contain a few underground Tiberium deposits. The GDI also continued to explore its military use, developing the Shockwave, a vehicle specifically designed to demolish reinforced structures; as well as the Sonic artillery, which is capable of disabling large groups of enemy.