Harvester Hunting is the eighth mission in the Nod campaign of Firestorm.

Prior to our main assault on CABAL, we need to slow down his production capabilities. CABAL is harvesting Tiberium heavily in Eastern Africa. Proceed there and eliminate CABAL's harvesting facilities. Our forces are scattered at this time and we can only afford to provide you with a small strike force.

Use the new Fist of Nod mobile production facility to build up an effective strike force and crush them.

As the war against CABAL grew increasingly desperate for the Brotherhood, Anton Slavik was forced to contact GDI General Paul Cortez and propose a cease-fire, as well as a joint operation against CABAL. Though the tension was high between the two, Cortez reluctantly agreed. Through the use of Nod and GDI data, CABAL's core component was finally located. However, the core was too well defended, so its support facilities must be destroyed first.

Once the mission begins, immediately unpack the Fist of Nod and begin constructing five Tick tanks. Use them to scout out the Tiberium fields around the area and destroy any harvesters they find, but take care to not let them drive into the Tiberium veins. Then build an attack buggy and queue up four artillery. Use the buggy to reveal the Veinholes to the west, then destroy them with artillery. After the artillery are finished, build two mobile repair vehicles and some more Tick tanks.

The northwestern CABAL base

Once the village to the northeast is under attack by cyborgs, send some of your Tick tanks to deal with them. Once your units arrive, more cyborgs and even Cyborg Reapers will arrive. But since they will mostly be focused on the civilian structures, they should not pose too much threat. After destroying all cyborgs in the village, force fire on the civilian trucks to pick up some money crates. 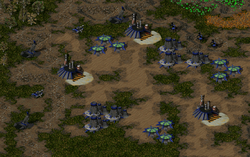 The southeastern CABAL base

As a reward for saving the village, an Orca Transport will arrive and drop off several engineers, as well as trucks carrying money crates. Build a Subterranean APC and move the engineers inside. Use the APC to retrieve the otherwise unreachable money crates down the cliff west of the village, as well as the crates on the island to the north (revealed by the Orca Transport). By this point, the veins from the two Veinholes that acted as the natural barrier to the northwestern CABAL base should have mostly died out.

Build a mobile sensor array. Sacrifice an attack buggy to scout out the base, and destroy the Obelisk of Light and artillery protecting it with your artillery. Note that the base may build a stealth generator to conceal itself, simply unpack the MSA near the base to reveal it. Once the base is secure, move the subterranean APC inside and capture the key buildings with engineers. Once the construction yard has been captured, immediately build a Hand of Nod and begin training engineers to capture the rest of the base.

Once the base is secured, collect the third and final cache of money crates to the south, then build up a force of Tick tanks, artillery, attack buggies, and repair vehicles and move toward the CABAL base to the east. Sacrifice the buggies to scout out the base, take out the Obelisks and artillery using your own artillery, then simply mop up the rest with Tick tanks. Once all harvesters and resource structures have been destroyed, the mission will complete.