Hearts and Minds is the tenth mission in the campaign of Kane's Wrath.

Due to information leaked by Alexa, GDI was able to order an ion cannon strike on Temple Prime, detonating the liquid Tiberium bomb and apparently killing Kane. Alexa was in shock at this turn of event, as Kilian Qatar took control of the Brotherhood.

However, Kane showed himself to Alexa and LEGION. He told them that they will have to deal with Qatar for her "betrayal" later, and explained that he was not present at Temple Prime, and he had baited GDI into striking Temple Prime with the ion cannon in order to cause a liquid Tiberium explosion that could attract the Visitors, who were already landing on Earth.

He told LEGION that they must stop GDI from destroying the Visitors' Towers, "for they will be portals, gateways to a civilization far beyond our own", and that there was much for them to learn.

At the beginning of the mission, Kane attempted to contact LEGION, but was apparently unable to do so due to interference. Instead, Alexa briefed LEGION on his mission, ordering him to liberate the city of Kampala from the forces of Traveler-59, a Scrin subfaction that enslaved the city using mind-control technology. 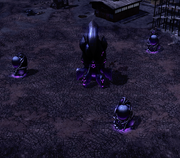 One of the three drone platforms

Traveler-59 forces had established a large base to the north, and deployed three drone platforms in the center of the city, the destruction of which would force the aliens out of the city. Several surviving Black Hand units, presumably the defenders of the city, were mind-controlled by cultists - bizarre alien-human hybrids - and patrol the city alongside Scrin forces. LEGION was ordered to free them from alien control if possible.

After the destruction of the first drone platform, LEGION received a message from Kane:

At this point, Traveler-59 deployed an Eradicator hexapod in an attempt to destroy the Nod forces. Realizing the threat of the massive alien walker, LEGION was granted access to the Redeemer, and was ordered to destroy the Eradicator before it threatens all Nod holdings in the sector.

After the destruction of the Eradicator, LEGION destroyed the remaining drone platforms, freeing the city from alien control. Kane once again attempted and failed to contact LEGION. Instead, Alexa told LEGION that the Tacitus was on the move, and ordered him to retrieve it.

At the beginning, immediately construct a Shredder turret and a refinery. Meanwhile, move your raider buggies up to kill the cultists controlling the flame tank. Once this is done, move the buggies and the freed Flame tank back to base. Place the Shredder turret on the northwestern edge of your base and the refinery to the easternmost edge, your economy for this mission depends on the massive blue Tiberium field to the east of your base.

A Prodigy will enter your base at this point, kill it with the buggies and the flame tank. Build a power plant, and then an operations center, in order to unlock liquid Tiberium core, since you will need a lot of power. Use your Scorpion tanks to crush the second cultist squad and free the Black Hand, they will be useful for anti-infantry defense.

Upgrade your power plants. Build a Hand of Nod to unlock laser turret and train a saboteur to capture the Tiberium spike. Build some more defenses, including SAM turrets (since Traveler-59 will soon start sending Stormriders) around your base to make sure you are safe from enemy harassment. Take special care to cover your eastern refinery.

Once your base is secure enough, build a tech lab and bolster your defenses with some Obelisks. Research Tiberium core missiles and quad turrets to make dealing with enemy attackers easier. You can build an air tower and some Venoms to free the two squads to the east from cultists, though set them to hold fire stance to prevent them from accidentally killing the mind controlled units. Also, only kill the cultists when the mind controlled units move away from the defenses near the southeastern corner, or they will be instantly killed once freed.

Now, it's time to prepare for the main objective. Build at least one more air tower and as many Vertigo bombers as you can, then build some more Obelisks, make sure they are concentrated on the edge of your base. You will need them for the next portion of the mission.

After destroying the first drone platform, Traveler-59 will deploy an Eradicator hexapod, which will directly head for your base. At this point you will be authorized to build the Redeemer engineering facility. Immediately begin constructing the facility, and the Redeemer itself, in order to fulfill the bonus objective. In the mean time, send your Vertigos and Specters after the Eradicator in order to do some damage. Don't expect to be able to take on the Eradicator with the Redeemer alone: it has heroic veterancy, and is equipped with Shock trooper pods and repair pods.

Once the Eradicator has been destroyed, take out the remaining drone platforms to finish the mission.