Surveillance footage of the Hydrofoil's primary and secondary functions

Adapted from a light skiff commonly employed by forces of the South American Allied nations' Coast Guard, the Allies' hydrofoil is a fast-moving vessel designed for surveillance and defensive operations. It features a fast-firing 20 mm close-in weapons system well-suited for engaging low-flying enemy aircraft, although its facing limits the weapon to a pure anti-air role. However, the hydrofoil gains versatility thanks to its Scramblegun weapon jammer, an electromagnetic beam that draws upon the hydrofoil's advanced computers and fuel reserves to temporarily disable most known weapons systems on an individual, nearby target. Thus, while the hydrofoil is not equipped to fend off a full-scale naval invasion, it can adequately fend for itself and provides invaluable support as part of a naval strike group. 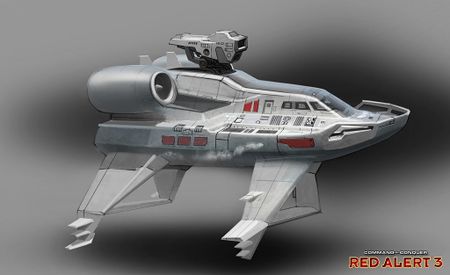 The Allies' hydrofoils offer an efficient, affordable anti-aircraft solution in one sleek package.

Today's hydrofoil was made famous in the Battle of Port-Au-Prince, in which a small fleet of them were able to shoot down an entire squadron of MiG fighters before the MiGs could eliminate a wing of Century bombers carrying reinforcements to the city. Meanwhile, several of the hydrofoils broke off to thwart an offshore dreadnought bombardment. This was the first time a naval commander employed one group of hydrofoils dedicated exclusively to jamming enemy ship capabilities and another to shred an airforce. After the MiGs were destroyed, the hydrofoils executed a high-speed tactical retreat. The only naval casualties that day were hydrofoil detachments that were unlucky enough to be sucked from out of the water by the Soviets' hated magnetic satellite. It has been rumored that the performance of the hyrdofoil that day was largely responsible for increased numbers of Soviet Akula-class submarines in Soviet operations around the Gulf of Mexico.

Though the hydrofoil is usually one of the first naval units fielded by many naval commanders, it features one of the most advanced pieces of technology ever produced by the Allied nations in the Scramblegun weapon jammer. The Scramblegun's electromagnetic force is demanding on all onboard weapon systems and thus is mutually exclusive with the 20mm gun. The jammer's capability is focused enough to block weapon systems of vehicles as small as the Sickle or ships as large as a Dreadnought. This allows the hydrofoil to at least stalemate a conflict with most other naval craft or enemy armor at the shoreline, leading a group of Guardian Tank and Apollo Fighter pilots to publicly question why the jamming technology has not been applied to ground and aerial attack craft. It appears that until Allied military scientists work out a way to add more than a single special weapons hardpoint to any design, they will have to make due as-is. 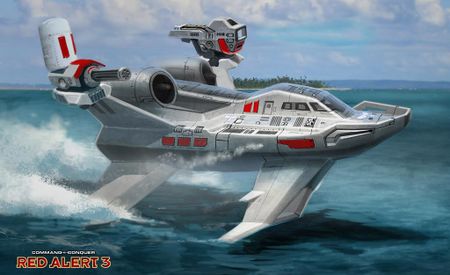 Researchers originally attempted to attach two weapon hardpoints to the hydrofoil, but couldn't find an adequate solution for the required power consumption.

Hydrofoil captains are more often than not former Coast Guard defenders looking to do the Allied nations proud, and they tend to be regarded for their poise in the face of formidable enemy fleets. While it must be daunting to hit the seas equipped with nothing that can directly attack other naval forces, most hydrofoil captains seem to relish the opportunity to go head-to-head with more imposing ships--and effectively shut them down.

Battlefield reconnaissance has revealed at least these facts about the Hydrofoil: