Not all of the casualties of the recent war have seen combat. Consider the case of Bart Truxton, imprisoned for years for carrying out espionage for the Empire of the Rising Sun. Though Truxton was recently exonerated, the full details of his story are so fantastic, so utterly unbelievable, they seem literally ripped from the pages of a modern science fiction novel. More and more evidence continues to surface that confirms the story and demonstrates the immense complexity and effectiveness of Imperial espionage activities during the war.

When the first MCV flying the sunburst flag of the Empire of the Rising sun rolled ashore at the Battle of Green Island, Allied security recognized that a catastrophic breach had occurred. There simply had not been enough time, argued top military intelligence officials, for the Japanese to have developed their own MCV since the Allies had publically revealed their own vehicle - they must have had someone on the inside. Through a painstaking investigation, security personnel tracked down video tapes of Truxton apparently stealing detailed technical documentation about the Allied MCV from a German lab and transmitting it to a ship waiting offshore (later determined to be a Yari mini-sub). A military tribunal convicted Truxton to life in a high-security prison. 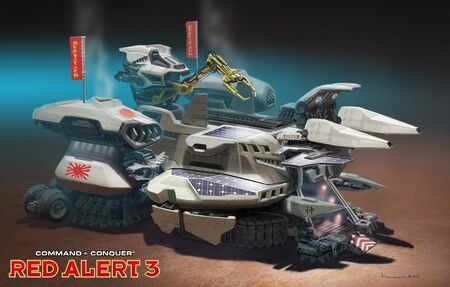 The Imperial MCV contains prepackaged stores of Nanocores to build all of their battlefield structures.

It was not until Allied scientists unlocked another mystery of the war - a high-level Imperial encoding process nicknamed "Wistful Blossom" - that the depth of the subterfuge began to become clear. A vast amount of encrypted Imperial information had been intercepted by the Allies in the course of the war, but much of it lay undeciphered in vast databanks. Once "Wistful Blossom" was cracked, a specific division of Allied intelligence was formed with the singular goal of piecing together the fragments of Imperial communications. A year and a half into that process, they decrypted a set of transmissions that told a shocking story.

The Empire of the Rising Sun had deployed an astoundingly lifelike robot, modeled as an exact duplicate of Truxton, to steal information about Allied vehicles. They had also deployed three other robots to observe the real Truxton extensively, gathering all of the personal, professional, and private data required to fashion a realistic facsimile. These robots then recruited Truxton for a weekly poker game, during which time the doppelganger Truxton obtained the real Truxton's security card and carried out the espionage. All of the robots were then ordered by Imperial high command to initiate self-destruction sequences --- remains of one were found in a warehouse fire, although its exact nature wasn't understood at the time - destroying both evidence of the deception and Truxton's alibi simultaneously.

Upon first being presented with the news of Truxton's unwitting participation in the traitorous activities, the Allied military chaffed. It was nigh-unthinkable that a plan this elaborate them could have occurred under the watchful eye of the Allied military. However, further corroboration came when another set of transmissions was deciphered detailing a similar operation in the Soviet Union. (Unfortunately, Maxim Novikov died in a Siberian gulag before his name was cleared.)

While the stolen technology undoubtedly aided the research efforts of the Imperial MCV program, their vehicle is anything but an exact copy of the Allied and Russian versions. Instead, the Japanese engineers used the acquired designs as a springboard for their own ideas, coming up with a system that is well-specialized for their own military doctrines, and applying the same creativity and attention to detail that Imperial spies used to gather the information in the first place.