From Command & Conquer Wiki
(Redirected from Infiltrate Nod Base)
Jump to: navigation, search

Havoc is the sixth mission in the GDI campaign of Tiberian Dawn.

Their initial advance had met with success but Nod forces had fortified themselves inside a base near Ostrava. A direct assault on the base would inevitably be costly and J.C. Carter wished to avoid casualties. So J.C. Carter figured out another strategy. The base was low on supplies and depended for its continued ability to function on transport shipments from Nod transport planes into the base's airstrip.

So J.C. Carter decided to carry out a commando raid to destroy the air strip and force the base's surrender. He placed the commando unit under the command of James Solomon.

However Nod Netwarriors had successfully jammed the incoming GDI signals into the area. As a result the commando unit did not get a clear idea what building it was that it was to destroy from the briefing.

The commando was brought to a small pair of islands at the edge of the area. Once there, he destroyed the two SAM sites located there. When the SAM sites were destroyed, a Chinook helicopter arrived to carry the commando unit to the mainland, staying to help transport it when necessary. The commando worked his way towards the Nod base. Along the way, he successfully avoided any Nod vehicles which his weapons could not adequately damage.

Note: If the commando destroys the airstrip, the subsequent mission, Finish The Nod Base, is skipped as this is the "correct" choice. However, it should be noted that whichever other building is destroyed in this mission is still destroyed in Finish The Nod Base. Therefore, if you plan to complete that mission, an important building such as the Refinery should be targeted to make it easier.

Having misunderstood which building to destroy, Nod forces continued to receive their eggs and bacon every morning. While the base was weakened by the loss of whatever building the commando unit has blown up, it could not now be secured without a full assault- and a corresponding loss of GDI life. 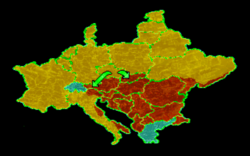 By destroyed the airstrip the Commando unit prevented Nod forces from supplying the base with their planes. They tried to send helicopters in, but without the the protection of Nod fighters located in the airstrip they were shot down by GDI planes.

Without any food to eat the base at Ostrava was soon forced to surrender to GDI forces. J.C. Carter had conquered it without a single casualty. With its fall the remaining Nod resistance in the Czech Republic collapsed and the GDI were able to install a friendly government in Prague.

Nod forces however as they invaded from the north-east were aided by pro-Nod rebels in Italy. At the same time their conquest of Turkey allowed them to launch their assault on Ukraine, which included an amphibious assault on the southern coast made possible by Nod control of the Black Sea.

In the bonus gallery of Command & Conquer: Remastered, the entire line that is otherwise intentionally garbled is available once the mission is finished: