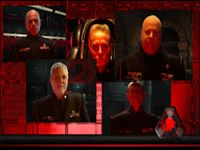 The Inner Circle was composed of the most powerful members of the Brotherhood of Nod, second to Kane in authority.

Prior and to a certain point during the events of the Firestorm Crisis, the group was composed of five generals who had survived the aftermath of GDI's victory over Kane. The group was dominated by two generals - Anton Slavik (in the middle of the right photo) and a man known as Marzaq (at the right of Slavik), both of whom tried to establish total control over the group and enforce their concept of what the Brotherhood should become in the second interregnum.

The Inner Circle members were eventually assassinated by CABAL's cyborgs, with only Anton Slavik successfully escaping the assassination attempt, as he did not rely on cyborg bodyguards.